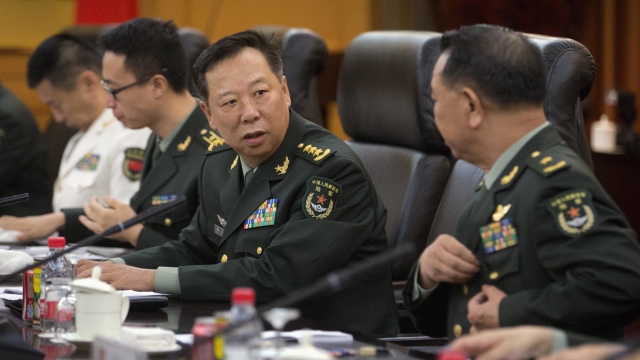 China's top general said demanded the U.S. "avoid impacting China-U.S. ties and stability" in Taiwan — which Beijing claims as its own territory.

China has demanded the U.S. cease military “collusion” with Taiwan during a virtual meeting between the joint chiefs of staff from the two countries whose relationship has grown increasingly fractious.

Gen. Li Zuocheng told Gen. Mark Milley on Thursday that China had “no room for compromise” on issues affecting its “core interests,” which include self-governing Taiwan, which Beijing claims as its own territory to be annexed by force if necessary.

China Accuses U.S. Of Trying To 'Hijack' Support In Asia

China has been rapidly modernizing its military and seeking to expand its influence and ambitions in the region.

The Chinese military would “resolutely safeguard national sovereignty and territorial integrity,” he said. “If anyone creates a wanton provocation, they will be met with the firm counterattack from the Chinese people."

China routinely flies warplanes near Taiwan to advertise its threat to attack, and the island's Defense Ministry said Chinese air force aircraft crossed the middle line of the Taiwan Strait dividing the two sides on Friday morning. It said measures were taken in response, including the scrambling of Taiwanese jets.

Such “provocative behavior ... has seriously damaged regional peace and stability," the ministry said.

Asked about the incident, a Chinese Foreign Ministry spokesperson said, “This exercise by China is directed at external interference and separatist Taiwan independence forces."

The meeting between Li and Milley followed  by Chinese Defense Minister Wei Fenghe at a regional security conference last month that was also attended by U.S. Secretary of Defense Lloyd Austin.

Wei accused the United States of trying to “hijack” the support of countries in the Asia-Pacific region to turn them against Beijing, saying Washington is seeking to advance its own interests “under the guise of multilateralism.”

At the same meeting in Singapore, Austin said China was causing instability with its claim to Taiwan and its increased military activity in the area.

And in May, U.S. Secretary of State Antony Blinken called China the “most serious long-term challenge to the international order” for the United States, with its claims to Taiwan and efforts to dominate the strategic South China Sea, prompting an angry response from Beijing.

The U.S. and its allies have responded with what they term “freedom of navigation" patrols in the South China Sea, prompting angry responses from Beijing.

Despite not having formal diplomatic relations in deference to Beijing, Washington remains Taiwan’s chief ally and supplier of defense weapons. U.S. law requires the government to treat all threats to the island as matters of “grave concern,” although it remains ambiguous on whether the U.S. military would defend Taiwan if it were attacked by China.