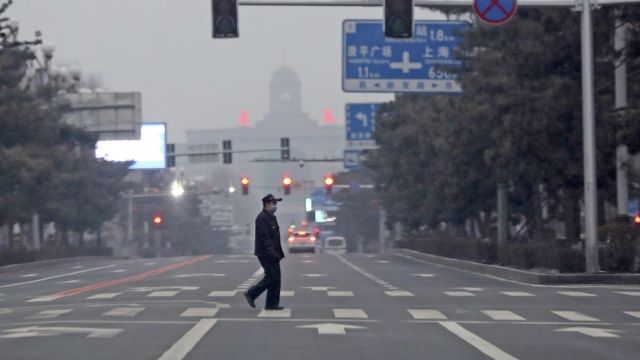 SMS
China Battles Multiple COVID Outbreaks Driven By Stealth Omicron
By Associated Press
By Associated Press
March 15, 2022
A government notice in one province said police permission would be required for people to leave the area or travel from one city to another.

China banned most people from leaving a coronavirus-hit northeastern province and mobilized military reservists Monday as the fast-spreading "stealth Omicron" variant fuels the country's biggest outbreak since the start of the pandemic two years ago.

The National Health Commission reported 1,337 locally transmitted cases in the latest 24-hour period, including 895 in the industrial province of Jilin. A government notice said that police permission would be required for people to leave the area or travel from one city to another.

The hard-hit province sent 7,000 reservists to help with the response, from keeping order and registering people at testing centers to using drones to carry out aerial spraying and disinfection, state broadcaster CCTV reported.

Hundreds of cases were reported in other provinces and cities along China's east coast and inland as well. Beijing, which had six new cases, and Shanghai, with 41, locked down residential and office buildings where infected people had been found.

"Every day when I go to work, I worry that if our office building will suddenly be locked down then I won't be able to get home, so I have bought a sleeping bag and stored some fast food in the office in advance, just in case," said Yimeng Li, a Shanghai resident.

While mainland China's numbers are small compared to many other countries, and even the semi-autonomous city of Hong Kong, they are the highest since COVID-19 killed thousands in the central city of Wuhan in early 2020. No deaths have been reported in the latest outbreaks.

Hong Kong on Monday reported 26,908 new cases and 249 deaths in its latest 24-hour period. The city counts its cases differently than the mainland, combining both rapid antigen tests and PCR test results.

The city's leader, Carrie Lam, said authorities would not tighten pandemic restrictions for now. "I have to consider whether the public, whether the people would accept further measures," she said at a press briefing.

Mainland China has seen relatively few infections since the initial Wuhan outbreak as the government has held fast to its zero-tolerance strategy, which is focused on stopping transmission of the coronavirus by relying on strict lockdowns and mandatory quarantines for anyone who has come into contact with a positive case.

The government has indicated it will continue to stick to its strategy of stopping transmission for the time being.

Officials on Sunday locked down the southern city of Shenzhen, which has 17.5 million people and is a major tech and finance hub that borders Hong Kong. That followed the lockdown of Changchun, home to 9 million people in Jilin province, starting last Friday.

On Monday, Zhang Wenhong, a prominent infectious disease expert at a hospital affiliated with Shanghai's Fudan University noted in an essay for China's business outlet Caixin, that the numbers for the mainland were still in the beginning stages of an "exponential rise."

China's vast passenger rail network said it would cut service significantly, and both China Railway and airlines said they would offer free refunds to people who had already bought tickets. Shanghai suspended bus service to other cities and provinces.

Shanghai has recorded 713 cases in March, of which 632 are asymptomatic cases. China counts positive and asymptomatic cases separately in its national numbers. Schools in China's largest city have switched to remote learning.

In Beijing, several buildings were sealed off over the weekend. Residents said they were willing to follow the zero-tolerance policies despite any personal impact.

"I think only when the epidemic is totally wiped out can we ease up," said Tong Xin, 38, a shop owner in the Silk Market, a tourist-oriented mall in the Chinese capital.

"But if our country opens up quickly now, it will cause a large number of infections in people in a short period of time," Zhang wrote Monday. "No matter how low the death rate is, it will still cause a run on medical resources and a short term shock to social life, causing irreparable harm to families and society."