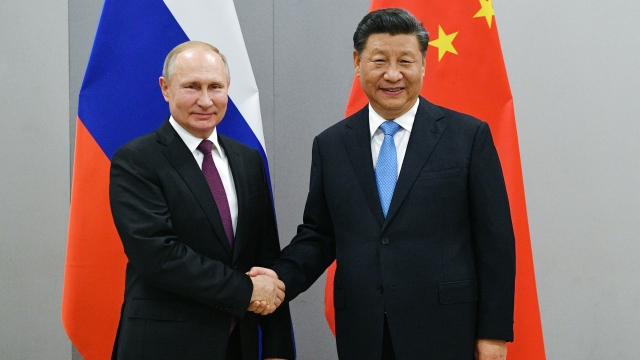 China and Russia have been working together on COVID-19 vaccine research as part of their declared Science and Technology Innovation Year.

But that joint effort is a byproduct of other collaborations that have raised eyebrows in Washington -- including on President Trump’s intelligence advisory board.

"To see two of your biggest adversaries all of a sudden cooperating, linking arms and working together, that's very concerning to us," says Kevin Hulbert.

Some national security experts fear an alliance could dull U.S. influence in negotiations and increase surveillance globally. That’s after the countries last month conducted their second joint air patrol over the Pacific -- and they’ve participated in numerous joint military exercises in recent years.

"That's something we've historically never seen happen before," says Hulbert. "The signal is be careful, we could create a real nightmare scenario for you."

Those war games are increasing in scale and geographical area. More cooperation -- on hypersonics, weapons that travel over vast distances at five times the speed of sound -- would present a new danger.

"Hypersonics, for example, is an area where both the Russians and the Chinese have done advanced research that we find troubling, particularly because it was so advanced. And so the idea of them working together on that, for example, would be very concerning," Hulbert says.

"That means that Russian scientists now have access to secret Chinese capabilities," says Margarita Konaev, a research fellow at Georgetown's Center for Security and Emerging Technology. "So in a sense, China is opening itself to Russia in a way that you wouldn't necessarily imagine between two powers that have not necessarily have had close ties before."

Another tie: The Trump administration shunned Chinese telecommunications giant Huawei to protect the United States from surveillance and espionage threats, but the firm has opened artificial intelligence labs and made deals with cloud security and facial recognition companies in, you guessed it, Russia.

"It’s collaborating with universities. It's developing closer ties with a lot of the Russian technical firms. And it also has an interest in Russian talent," says Konaev. "It aims to train about 50,000 people with technical skills."

"Since 2015, China and Russia have drifted closer together when it comes to Internet cooperation," says Emerson Brooking, a resident fellow at the Atlantic Council’s Digital Forensic Research Lab. "Vladimir Putin and Xi Jinping actually signed a formal accord for a closer Internet cooperation and, as they frame it, closer national security cooperation."

"What this will end up looking like in the long run is accelerating us toward a system of two Internets: A free Internet anchored by U.S. social media platforms and prevalent in the West, and then a closed Internet, different closed Internet systems in China, in Russia, in Iran and elsewhere," says Brooking.

Though the intelligence community is studying their relationship, right now China, with the world’s second largest economy and massive espionage efforts, is widely seen as the United States’ greatest threat.

"What I hope the Biden administration does is take China in particular, very seriously," says Hulbert. "You know, in the United States, we tend to think from quarter to quarter. The Chinese are much better than we are at looking over the horizon and thinking about where they're going to be in ten years, in twenty five years, in one hundred years."

The Biden transition team told Newsy it couldn’t comment at this time. But the president-elect says his choice to lead the CIA, William Burns, could mobilize government efforts, “whether it’s cyber attacks emanating from Moscow [or] the challenge China poses.”