Chicago Is Suing Jeff Sessions Over His Sanctuary City Crackdown 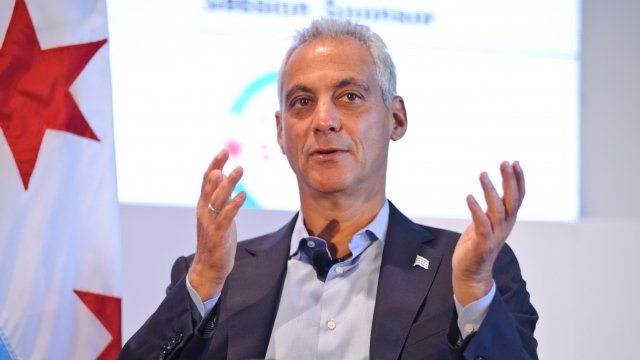 Sanctuary cities allow law enforcement to refuse federal requests to detain people over their immigration status. In other cities, those people could be more at risk for deportation.

Emanuel argues it's illegal for Sessions to change the conditions of the federal grants after they were already approved by Congress.

Emanuel said: “We are not going to be put in a position of choosing [between] who we are as a welcoming city and strengthening our police department." Most of the federal money Chicago expected to receive this year would go toward buying police vehicles.

Emanuel is one of many local leaders who won't comply with federal immigration rules. New York City, Los Angeles and dozens of counties across the U.S. refuse to hold undocumented immigrants, either because they don't want to or because it's just too expensive.

Sessions says it's essential that immigration laws are enforced nationwide.

"When cities and states refuse to help enforce immigration laws, our nation is less safe," Sessions said at a press briefing.

But a recent study found that counties that refused ICE requests to hold immigrants actually saw fewer crimes on average than those that complied.

Plus, the threat of losing federal funds probably doesn't scare Chicago too much. The Windy City was set to get a little over $3 million in grants this year, just a fraction of a percent of the city's budget.

That, combined with the potential benefits of the lawsuit, could make it a smart political play for Emanuel. The Chicago Tribune called it a "relatively low-stakes gambit with some political upside for Emanuel as he courts support from Latinos."

Some state and city attorneys believe the White House is overstepping its authority, saying Congress should be the one deciding where federal funds are spent.