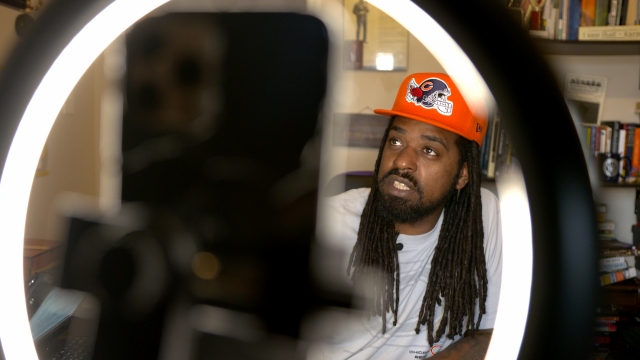 SMS
Chicago TikTok Creator Is The Windy City's Unofficial Historian
By Ben Schamisso
By Ben Schamisso
February 23, 2022
A man hoping to educate his kids about Chicago has spun his online fame into real-life opportunities.

Shermann Thomas is a father of seven and full-time power grid operator living on the South Side of Chicago, but he's also Chicago's unofficial TikTok historian.

Known as "6figga_dilla" online, Thomas has been passionate about history since he was a kid learning from his dad, who was a Chicago police officer for more than 30 years.

But he caught his break last year after deciding to show his own kids there was more to life — and to TikTok — than dance moves.

"On the one hand, just trying to convince my kids that we could stop embarrassing ourselves in that way," Thomas said. "But on the other, before I started, when you looked up Chicago history on TikTok, there was nothing good."

From the 1919 Chicago race riots to the creation of the Italian beef sandwich, Thomas' short videos touch on every aspect of the city's history — with a focus on black Chicagoans and the overarching belief that "Chicago is the greatest city on Earth!" according to his videos.

NEWSY'S BEN SCHAMISSO: Why do you think there's such an appetite for your videos here in Chicago and all around the country?

SHERMANN THOMAS: We're all tired of bad news. You know, if it isn't mask-no mask, vaccine-no vaccine, pandemic-no pandemic, then it's political stuff all the time. And none of that really points to our shared greatness, which can be found in our history.

Today, Thomas has more than 82,000 followers on TikTok and has managed to spin his online fame into real-life opportunities, Including a new business offering guided visits of South Side neighborhoods that tend to get overlooked despite their rich histories.

SCHAMISSO: When you give your tours as part of your business, what do you tell them?

THOMAS: "I lay out how the neighborhood came to be, who was the predominant ethnicity when that neighborhood was built. But right now, you see vacant lots. When I'm on South Side tours with people from the North Side, I point out to them that they don't have this problem.

Homicides in Chicago surged to a 25-year-high in 2021 — with the violence disproportionately impacting the South and West sides.

But Thomas, a lifelong South-Sider, wants his community to be known for its many positive qualities.

And in between being a dad, a full-time employee, a business owner and a TikTok creator, Thomas is adding another job to his plate, as he works on a Netflix pilot influenced by Chicago history.