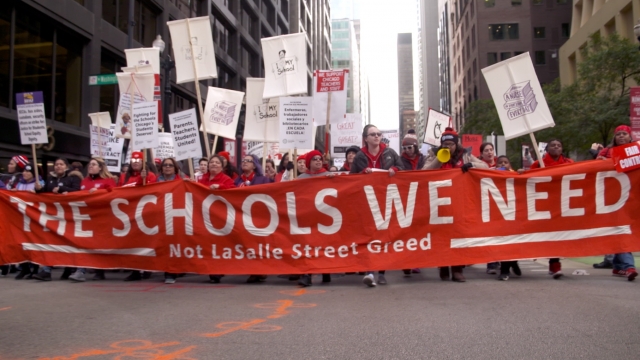 Chicago Public Schools teachers are not only striking for better pay and smaller class sizes, but also to highlight the alarming number of homeless students and their struggles.

Jesse Sharkey, the Chicago Teachers Union president, said: "When we brought it to the table, we were originally met with scorn and derision. And they told us this doesn't belong here. But we then pointed out there are 17,000 homeless students in Chicago. The people who work in the schools can't afford to live here."

With no city rent control or rent stabilization laws, the CTU has added affordable housing to its labor contract proposals. That includes hiring support staff to guide Chicago families in danger of being homeless and instituting a program that helps new teachers purchase homes. But Mayor Lori Lightfoot pushed back on these proposals, saying in a statement that "affordable housing is a critical issue," but doesn't belong in a labor contract.

The teachers say the two issues are absolutely intertwined because homelessness impacts their ability to teach and students' ability to learn. Studies show homeless students face higher rates of developmental delay and learning disabilities, and are often held back in classes. 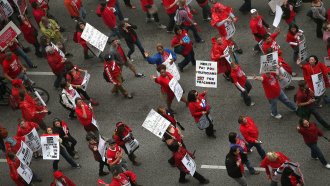 Ashley Galvan Ramos, a former homeless student, said: "It was definitely hard to focus on midterms, any quizzes that had to come up, because I was focusing more on the safety of my family. Where we were going to go? And finding the next place under a highway or a train track where it was safe for us to stay there."

Of the nearly 17,000 homeless students in the 2018-2019 school year, Chicago Public Schools says 98.3% are students of color, and that they're disproportionately black. Homeless students are often struggling with mental health issues that teachers are not often equipped to help.

Ramos said, "There's trauma, a lot of trauma that I'm trying to deal with at the moment."

Housing insecurity also impacts educators like teacher's aides who don't make enough money. The minimum wage in Chicago is $13 an hour, the average salary of a Chicago teacher's aide. But it isn't enough to rent a studio or one-bedroom apartment in Cook County, Illinois, where Chicago is located. According to the National Low Income Housing Coalition, in Chicago, a person must make more than $17 an hour to rent a studio or $20 an hour for a one-bedroom.

Nickole Pierre, a second grade educator, said: "They should help us out with affordable housing. They should help out for students and teachers because we are forced, we are obligated to stay within the city parameters. We can't live outside, where it may be cheaper for us to live."

Teachers we spoke to say the strike is more than a demand for pay increase. 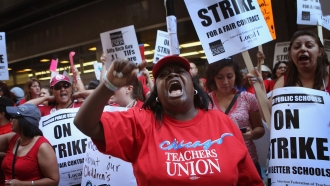 Jackson Potter, a CTU member and teacher, said: "Our members have said, 'Look, salary, it's important. But it isn't the most important.' … We didn't get into this job to be rich. We did it to help students who are the most vulnerable."

Student homelessness isn't just a Chicago problem. Twenty states experienced a growth of 10% or more in their homeless student populations from 2014-2017. Teachers unions in L.A. and Minneapolis also addressed it during their negotiations.