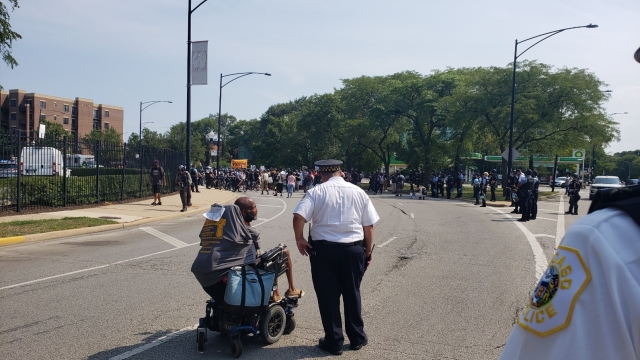 Chicago's police superintendent says he stands by the actions of Chicago police officers during weekend protests against police brutality and racial injustice.

He says officers acted professionally in the face of a crowd they say was trying to provoke violence.

"It was not until later this afternoon during a separate protest downtown where multiple agitators hijacked this peaceful protest. This group deployed large black umbrellas, changed their appearance and began pushing our officers and eventually assaulting them. To protect the peaceful protesters, as well as their fellow officers, our officers responded propositionally to get the situation under control."

This is video released by the Chicago Police Department showing a protester using a skateboard to strike a police officer.

Meanwhile, officers were seen using tear gas to disperse demonstrators and beating them.

Video footage also showed officers using the practice of "kettling" ... blocking protesters into limited areas with nowhere to turn then ordering them to disperse.

Several arrests were made.