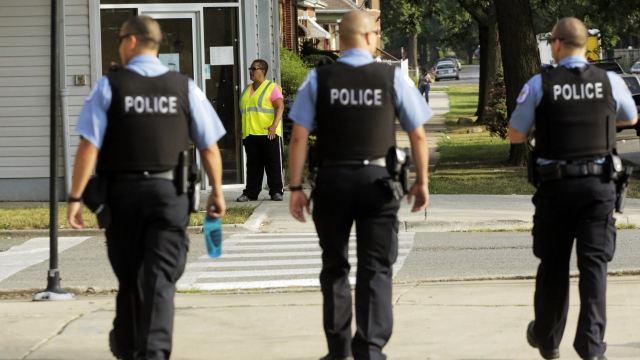 Chicago Mayor Lori Lightfoot set Friday as the deadline for all city workers to register their COVID-19 vaccinations or agree to twice-weekly testing.

It’s a big day in Chicago. Oct. 15 is the deadline for all city employees to disclose their vaccination status.

The problem? The head of the police union is urging officers not to comply.

But a city rule that Chicago police officers must get vaccinated to protect themselves and the public is at the center of a major dispute.

The police union head is telling members to not report their vaccination status, calling the mandate illegal.

"Do not fill out the portal information. You are under no obligation to do that, other than the city’s demand," said John Catanzara, president of the city's Fraternal Order of Police.

Chicago Mayor Lori Lightfoot set Friday as the deadline for all city workers to either register their COVID-19 vaccinations or agree to twice-weekly testing at their own expense. The penalty for not doing so could be suspension without pay.

"Getting this vaccine is necessary to save your life, the life of your family members and everyone you come into encounter with," Lightfoot said.

No official statistics are available on how many of Chicago's police are refusing to take the jab — though the union suggests half will refuse to tell the city their status.

Elsewhere in the U.S. is a similar reluctance among police officers.

In San Diego, a survey of 700 officers found about 300 said they would rather be fired than comply with a vaccine mandate.

There's pushback in Florida, too.

"As a union head, we don't like being mandated or pushed into anything like that," said John Kazanjian, head of Florida's Police Benevolent Association. "It's a freedom of choice, absolutely — that's why we live in this great country of ours."

By one count nationally, more than 460 law enforcement officials have died from COVID-19 since the start of the pandemic. The New York Times says that is more than four times the number of officers who have died from gunfire in that time period.

Back in Chicago — a city that has seen horrendous levels of gun violence this year with more than 600 homicides — there are concerns that officers being suspended or not showing up because they're not vaccinated would lead to even more bloodshed.

Officials say they have a contingency plan but are calling on police to do their duty.

"Our goal is to create a safe workplace, and the best way to do that — the biggest tool that we have — is by getting people fully vaccinated," Lightfoot said.

Friday, Mayor Lightfoot asked a judge in a new complaint to block the city police officers "from engaging in, supporting or encouraging any work stoppage or strike by refusing to comply with the city’s lawful" vaccination policy.

As for the union president, he's also doubling down. He posted a video Thursday calling the mayor a dictator and blaming her for the city's crime.

Individuals have their own personal reasons for avoiding vaccines, but some experts point out that many police are young — and we've seen there has been a hesitancy there across the board. There are also a high number of white men with conservative politics working as police officers. And then there is the union issue, where changes need to be negotiated at the bargaining table.