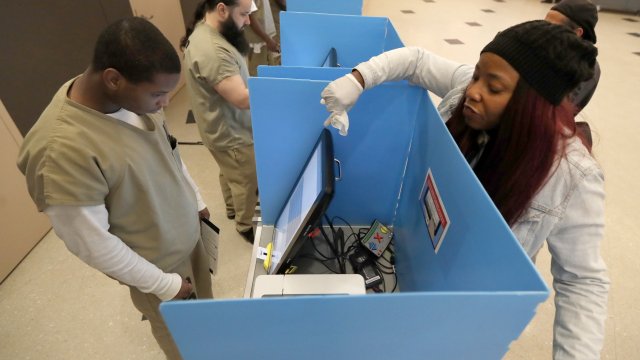 Chicago's Cook County Jail is the first facility in the country to have its own polling precinct inside the jail to offer voting for pre-trial detainees.

"They look at us as criminals and everything, but we're the same as you. … My voice needs to be heard, so I took it upon myself, like, maybe I should get out and vote," Cook County Jail detainee and first-time voter Talma Anderson said.

"I believe any step, even a baby step, is better than no step. … And you've got to start somewhere. So, you know, I believe it's a step in the right direction," Cook County Jail detainee and Illinois primary voter Ioan Lela said.

According to the Chicago Clerk's Office, more than 1,200 detainees have voted in Illinois' primary election already and that doesn't include those who voted this past weekend.

Illinois Gov. J. B. Pritzker signed Senate Bill 2090 into law back in August, mandating that every election authority in that state facilitate voting for pre-trial detainees and that Cook County set up a temporary polling branch in the county jail. This law went into effect Jan. 1, and this group of pre-trial detainees is the first to take advantage.

"The guys on my deck, they seemed excited. It was certain people they wanted to vote for. … We want to elect them so they can do something good for us and make something happen. So it was pretty exciting," Anderson said.

According to the Prison Policy Initiative, more than three-quarters of the people held in jails have not been convicted of a crime — upwards of 450,000 people in the U.S.

And while nationally, pre-trial detainees have had the right to vote since 1974, Illinois is the first state in the country to mandate that jails facilitate voting opportunities for their inmates.

Sheriff Tom Dart, who runs the Cook County Jail, has been pushing for more voting opportunities in his facility for years using absentee ballots but says this is a lot more effective.

"The absentee ballot was tricky, because people would come, then they would fill out a ballot request, but then they'd be gone. So having the polling place, … it was really nice to watch this play out. And the numbers don't lie. I mean, we've tripled our turnout numbers in just two days," Dart said.