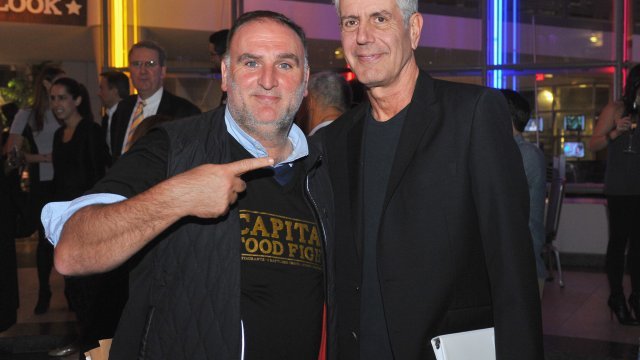 Their trip ended up being one of the last "Parts Unknown" episodes filmed.

And shortly before Bourdain's death, they did just that — with camera crew in tow — to film what ended up being one of the last episodes of Bourdain's travel show "Parts Unknown."

"For me, cameras going or not, I was going to show him the place that I was born, the restaurants where I like to eat, and to introduce him to some of my family members and to show him a story that will happen without the cameras," Andrés said.

We sit down with chef José Andrés to talk about what food means to people's recovery.

Food was central to their exploration, which included tasting the region's famous "fabe" beans. They are used to create a popular stew.

"For us to get this Fabada Asturiana, we had to walk up this mountain, and there are these beautiful beans, probably the best beans anywhere in the world, very expensive beans. They're very delicate, they're like a kiss in the mouth, they disappear. Then [they're combined] with the blood sausage, the chorizo the bacon — and he loved it. ... There were many of these moments when the camera stopped rolling, we kept going and talking and drinking," Andrés said.

And when it comes to drinking, Bourdain shared one of Andrés' favorites: rum sours.

Andrés said: "I remember in Haiti, one year after the earthquake. … He wanted me to be showing up making rum sours in a local bar, which we love. And I'm like: 'Tony, come on, I tell my wife I'm here to help but I'm going to show up in your show and make rum sours in a bar? No way!' ... But the truth is the time I spent traveling with him and the main time we've been together. … We always enjoyed the time together."

"I think the planet is smaller thanks to him. He showed us that we shouldn't be afraid of people who don't talk like us or don't dress like us or that are a different religion than ours," Andrés said.