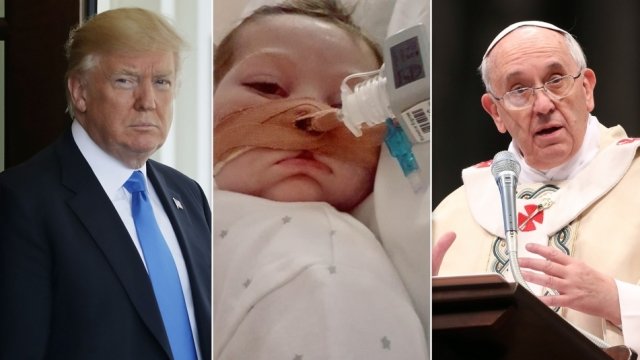 SMS
Why An Infant Has Gotten The Attention Of President Trump And The Pope
By Lauren Stephenson
By Lauren Stephenson
July 3, 2017
Charlie Gard, a British baby, has been at the center of a legal battle to determine whether or not he should be removed from life support.
SHOW TRANSCRIPT

An 11-month-old infant has gotten the attention of two of the world's most influential men.

Both President Donald Trump and Pope Francis have expressed their support for Charlie Gard, who is currently hospitalized in London and at the center of a legal battle.

Gard was born with mitochondrial depletion syndrome, which has left him on life support.

His doctors want to take him off life support, and a judge ruled in their favor.

But Gard's parents want to bring their son to the U.S. for an experimental treatment. They have raised over 1.3 million British pounds to do so.

The treatment has been used on others with different types of mitochondrial depletion syndrome, but not on the type Gard has.

They appealed to the U.K. Supreme Court and the European Court of Human Rights. Both attempts failed. 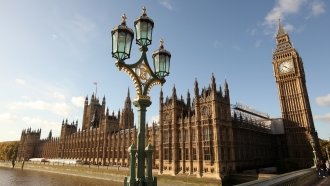 UK's Next Government Is Finally A Done Deal, But It Wasn't Cheap

In its decision last week, the European Court of Human Rights deemed the case "inadmissible," leaving the previous rulings in place. It also lifted an order to keep Gard on life support.

The court determined that "undergoing experimental treatment with no prospects of success would offer no benefit, and continue to cause [Gard] significant harm."

In response to the ruling, Great Ormond Street Hospital, which is treating Gard, said: "Today’s decision by the European Court of Human Rights marks the end of what has been a very difficult process and our priority is to provide every possible support to Charlie’s parents as we prepare for the next steps. There will be no rush by Great Ormond Street Hospital to change Charlie’s care and any future treatment plans will involve careful planning and discussion."

The hospital released a statement Friday saying it is working with Gard's parents to put "plans in place for his care, and to give them more time together as a family."

According to Vatican Radio, a representative for the Pope said: "For them he prays, hoping that their desire to accompany and care for their own child to the end is not ignored."

In a tweet Monday morning, President Trump said: "If we can help little #CharlieGard ... we would be delighted to do so."