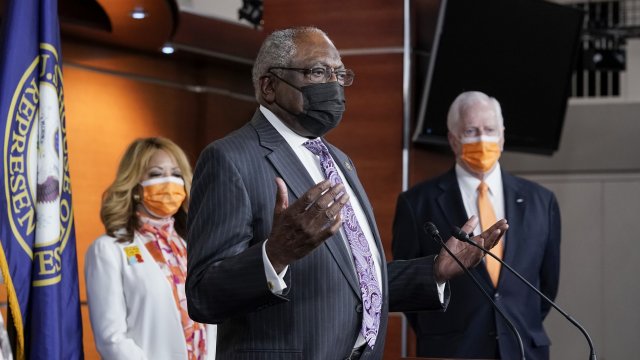 Like many other mass shootings before it, the 2015 tragedy in Charleston, South Carolina, inspired legislative action. And like so many before, nothing got done in Congress.

Clyburn wants to close the “Charleston loophole” once and for all, nearly six years after the attack on Mother Emanuel Church.

“If he had 10 days rather than three days, he never would have gotten the gun," Clyburn said.

The “loophole” refers to the three-day period the FBI has to conduct background checks on potential gun buyers. If it doesn't finish a check within that time frame, the sale can go forward.

To change that, Clyburn has proposed the Enhanced Background Checks Act. It would extend the window to a minimum of 10 business days. If a potential buyer still hasn't been cleared in that time frame, they can ask for an expedited review. If 20 total business days pass without it completed, buyers can then make the purchase.

Bill proponents say an extended window could have blocked the Emanuel Church shooter from purchasing a gun because of his past felony drug charge.

“His purchase was delayed and the records couldn't be resolved in that three-day period. So the seller sold him the firearm, which he then used to murder worshipers in a church," said Cassandra Crifasi, deputy director of the Center for Gun Policy and Research.

Clyburn, whose congressional district includes Charleston, is one of the highest-ranking Democrats in Congress. His influence helped President Joe Biden get to the White House. But it may not be enough to pass the bill.

Both Republican South Carolina senators, Lindsey Graham and Tim Scott, declined to comment for this story. Neither has said how they plan to vote. But there was plenty of GOP opposition to Clyburn's previous attempts to pass similar bills, with lawmakers saying it would put an undue burden on potential gun buyers. Advocacy groups like the NRA argue that since the Charleston shooter bought his weapon well before the attack, a longer time for background checks wouldn’t have prevented it.

Experts say there isn’t a set of indicators that can always predict mass shootings.

“It would have been very hard to know in the case of the Charleston shooter that he was going to acquire this firearm and go perpetrate a mass shooting. But at the end of the day, he was prohibited. He never should have had one," Crifasi said.

Clyburn’s bill passed in the House but awaits a vote in the Senate. It also comes as the White House announces action to address gun violence, following shootings in Boulder, Colorado, and Atlanta earlier this year.