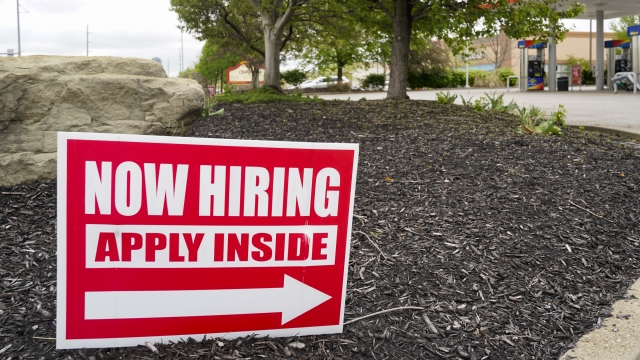 SMS
Chamber Of Commerce Seeks End To Weekly Jobless Aid As Hiring Stalls
By Gage Jackson
By Gage Jackson
May 7, 2021
The group believes the Biden administration's $300 enhanced weekly unemployment benefits are incentivizing some people to not search for work.
SHOW TRANSCRIPT

It's a sign businesses are struggling to fill open positions even as the country recovers economically from the pandemic.

Meanwhile the hospitality sector, which includes restaurants, hotels and venues, is basically begging for workers.

Lots of jobs are going unfilled because people have changed fields or left the workforce and of course, some unemployed Americans are still afraid to go back to work due to the pandemic.

"Here we are in an empty dining room where normally, for lunch, we would be open and serving, you know, a couple of hundred guests," business owner Mac Hay said, "But this year, because of our staff shortage, both with U.S. workers but also workers from overseas, we've we can't fill the demand."

In response, the U.S. Chamber of Commerce is calling on Washington to immediately stop paying Americans an extra $300 in weekly unemployment benefits. It's saying that boost is incentivizing some Americans to not return to work.

The group also said the Biden administration's supplemental benefits means about 1 in 4 Americans is making more money unemployed than they earned while they were working.