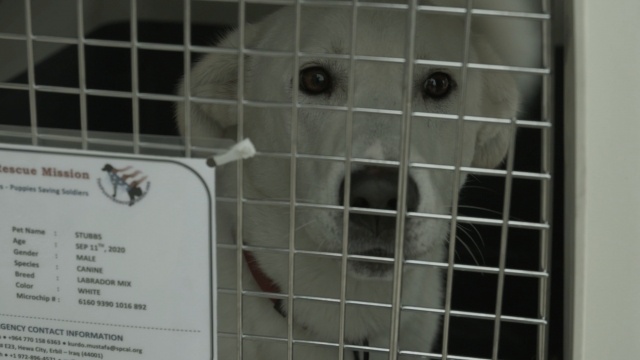 Meet Stubbs. Thanks to the Puppy Rescue Mission, he's on his way from Syria to his new forever home in North Carolina where he'll ultimately live with a U.S. soldier who bonded with him overseas. And Stubbs arrived in the U.S. just in the nick of time.

As of July 14, the CDC is banning dog imports from 113 countries deemed a high-risk for rabies, and Syria is on that list.

"Our main countries that we rescue from are Afghanistan, Iraq, Syria, Kuwait, Saudi Arabia. Anywhere that our deployed military are, we will help them get their battle buddy home. And all the countries I just mentioned, unfortunately, are on the banned list," said Anna Cannan, president and founder of the Puppy Rescue Mission.

A CDC spokesperson told Newsy an estimated 1 million dogs enter the U.S. each year, and since 2015 a total of four imported dogs have tested positive for rabies. But the agency saw an increased number of dogs arriving with "irregular" rabies vaccination paperwork in 2020, and that's what prompted the new temporary ban.

Part of the concern also stems from the pandemic. The CDC said, "Reduced flight schedules have resulted in longer wait times for dogs denied entry to be returned to their country of departure. Prolonged wait times in airport warehouses have caused some dogs to get sick and die."

For organizations like the Puppy Rescue Mission, the new rule might force them to turn soldiers away for the first time.

"You’re gonna be the poster boy. Get rid of that CDC ban, huh. Getting exceptions for you guys," said Lion.

"We're getting a lot of distraught and fearful emails, are my dogs going to be able to get home? What can we do? Who can we reach out to? So they're grasping at strings right now, you know, they're afraid that they're going to have to leave their their dogs behind," said Cannan.

The impact of this change goes far beyond rescue dogs like Stubbs.

“I can't leave my dog here. I mean, she's just part of our family," said Aysu Erdemir, a dog owner.

Aysu Erdemir and her family left the U.S. with their dog weeks before the rule change was announced. But because they're spending the summer in Turkey, they were left scrambling for a solution. The CDC did not offer any exceptions for families like them.

"They say that you have to find a way to send your dog back or make arrangements in the foreign country. Like this is just so absurd," said Erdemir.

The agency is offering a waiver for U.S. diplomatic and military families, but the application process takes at least six weeks and some of the required testing can take two or three months. With just 30 days notice, State Department employees like Casey Fegley had no choice but to change their travel plans.

"And then to have to, last minute, change them when you're already dealing with packing up your house and doing your UAB and in our case, taking a kid to boarding school, and we've got all these other busy pieces. And it's like throwing one more ball at you to juggle when you're already juggling so much. And it was just ridiculous," said Casey Fegley, a State Department employee working at the U.S. Embassy in Dar es Salaam, Tanzania.

The new dog import ban is in effect for at least one year. Puppy Rescue Mission is hoping they can find a way to keep helping soldiers get their battle buddies home to the U.S.