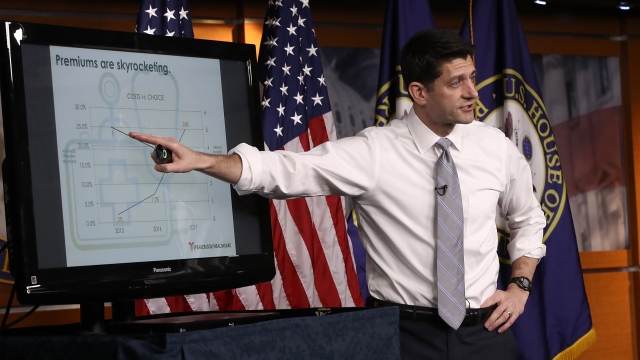 The Congressional Budget Office said the updated American Health Care Act is a step back from the first.

Republican leaders are scrambling to convince legislators that updates to the American Health Care Act — President Trump's alternative to Obamacare — will benefit Americans.

One group that's not buying it is the Congressional Budget Office. The non-partisan number crunchers initially projected the bill would result in 24 million more uninsured Americans than Obamacare.

The AHCA's authors tried to make the bill more appealing, but the budget office projected that the updated bill would still likely result in the same number of uninsured Americans.

The newest version of the bill would cost about $150 billion less than Obamacare. The only problem with that is the original AHCA would have saved the government more than twice that much.

The AHCA should be a slam dunk for House Republicans because of their majority. But many conservatives think the bill isn't different enough from the Affordable Care Act and have refused to support it.

If more than 21 Republicans vote against the bill, its passage is in jeopardy.

And since Democrats are blasting the AHCA for its dramatic coverage reductions, President Trump's first big piece of legislation could be heading for a massive flop.

The bill will probably have some changes before it's voted on. The House will reportedly take a vote on the measure Friday. Even if it passes there, it has an uphill battle in the Senate, as well.