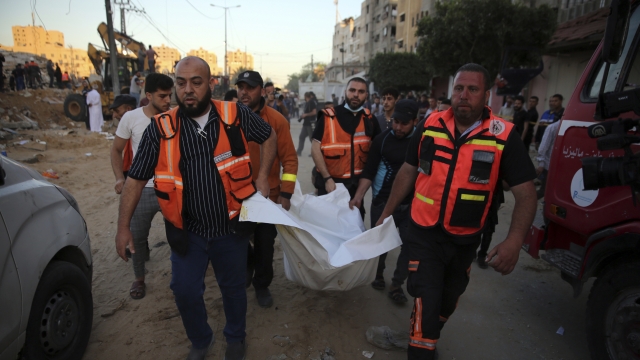 SMS
Casualties Mount As Israel-Gaza Fighting Continues
By Kamil Zawadzki
By Kamil Zawadzki
May 13, 2021
Hamas launched rockets into Israel today, with the Israeli military responding with its own offensive in the Gaza Strip.
SHOW TRANSCRIPT

Israeli forces and Hamas are still trading fire – even as Egyptian negotiators try to broker an end to the violence.

Israel is calling up 9,000 more reserve troops amid the fighting.

Hamas launched rockets into Israel today, with the Israeli military responding with its own offensive in the Gaza Strip.

Casualties are mounting on both sides. Gaza officials say more than 80 people have been killed. And Israel's government has confirmed 7 deaths so far.

A top advisor to Israel's prime minister says his country wants lasting solutions, not just a reprieve for militants to regroup and prepare more attacks.

Senior adviser Mark Regev says: "We're hitting Hamas hard and the truth is they'd be very happy for us to stop. But just to have them regroup and get a time out and then for them to beat us again tomorrow, there's no pointp in that ... We want to see a situation where Israeli civilians don't have to live in fear of an incoming rockets by Gaza."

Hamas has called for a full-scale Palestinian uprising.

And violence has broken out across Israel between Arab and Jewish ultra-nationalist mobs.