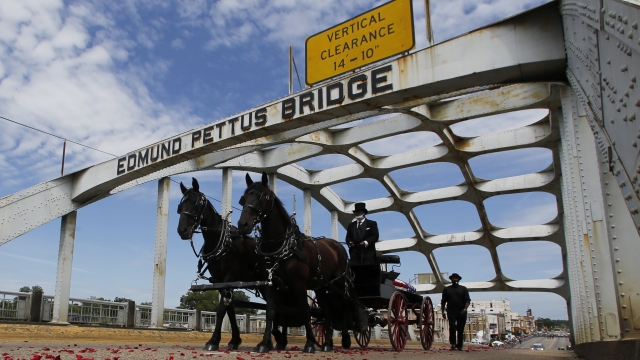 The body of the late U.S. Rep. John Lewis made its final journey across the Edmund Pettus Bridge on Sunday, on his way to lie in repose at the Alabama capitol. Rep. Terri Sewell called the event "poetic justice."

In 1965, peaceful protesters marched for civil rights across the bridge, which is named after a Confederate general and KKK leader. Lewis was one of the leaders of that march from Selma to Montgomery. Now remembered as "Bloody Sunday," demonstrators were beaten by Alabama state troopers. Lewis's skull was fractured during that incident.

The march was key in rallying support for the 1965 Voting Rights Act against racial discrimination. The law was struck down by the Supreme Court half a century later, but there's a new push to restore certain protections from it in Lewis's honor.

A petition to rename the bridge after Lewis has gathered over a half million signatures.

"The Final Crossing" was part of a series of events in honor of the late congressman. It started Saturday in his hometown of Troy, Alabama and will end Thursday with a funeral at an historic Atlanta church once led by Rev. Martin Luther King Jr.

Additional reporting by Kim Chandler from the Associated Press.