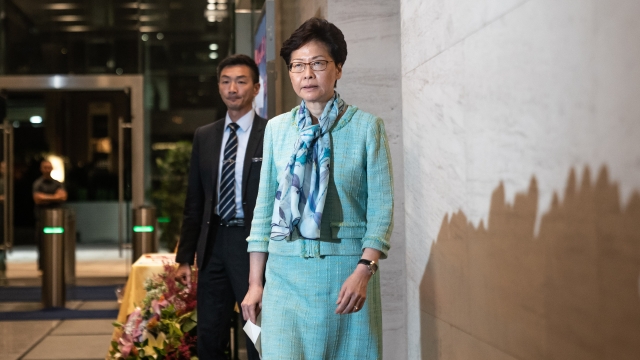 In a news conference Tuesday, Carrie Lam said she hopes protests over the weekend are the start of peace in the city.

After a weekend of peaceful protests in Hong Kong, leader Carrie Lam is now willing to hold "open and direct" talks with pro-democracy demonstrators.

In a news conference Tuesday, Lam said she hopes these most recent protests are the start of peace in Hong Kong. She noted, "Work will start immediately to build a platform of dialogue."

Organizers estimate around 1.7 million people turned out for a march from Victoria Park to the city's legislature on Sunday. The city's police force kept a low profile during the rally. And no tear gas was fired over the weekend, a rarity in the 11 weeks that protests have been staged.

Demonstrators initially started protesting over a now-suspended extradition bill, which would have allowed China to extradite suspects from Hong Kong.

Lam reiterated that there are currently no plans to revive the bill.

"I can give you this very clear commitment at the political level that the bill is dead," she said.

But critics still want the bill to be formally withdrawn to prevent it from being fast tracked through the legislative process in the future.

Protesters have also been calling for democratic reforms and for an independent investigation into allegations that police have used excessive force on demonstrators.

Lam's repeatedly pushed back against the idea of such an investigation. She said Tuesday the Independent Police Complaints Council, which has been investigating the protests since July, would seek help over from overseas experts. But The Guardian noted the Council will likely side with police, since it's made up of many pro-government supporters.