Carly Fiorina Skipped Her Own Caucus Party, Then Skipped Out Of Iowa 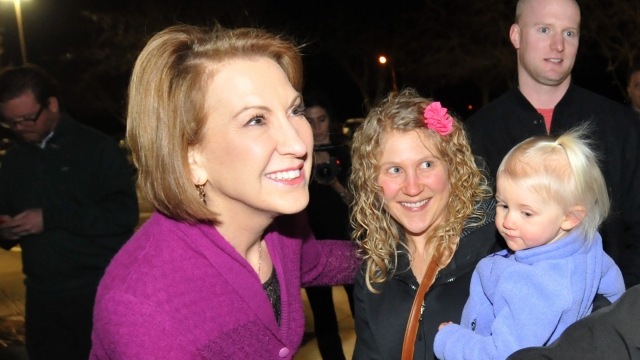 SMS
Carly Fiorina Skipped Her Own Caucus Party, Then Skipped Out Of Iowa
By Matt Moreno
By Matt Moreno
February 2, 2016
GOP presidential candidate Carly Fiorina tweeted around 10:30 p.m. that she was boarding a plane and heading to New Hampshire.
SHOW TRANSCRIPT

There wasn't much celebrating going on at Republican presidential candidate Carly Fiorina's camp after early Iowa caucus results started to roll in Monday night. (Video via Carly for America)

With only about 2 percent of the vote, preliminary results had her well behind leader Ted Cruz's nearly 28 percent.

But the disappointing numbers apparently aren't why she skipped out on her own after-party. Fiorina was reportedly a no-show because of an impending storm.

Fiorina tweeted around 10:30 p.m. local time that she was boarding a plane and headed to New Hampshire.

Which was about the same time most other candidates were rallying hundreds of supporters as results continued to file in.

But as WHO-TV reporter Roger Riley pointed out, Fiorina's party was as empty as could be.

The only problem with Fiorina's weather excuse, if true, is Des Moines wasn't getting hit by severe weather at the time and wasn't expected to until a few hours later.

In the same tweet from Fiorina, she also linked followers to her events calender — one that didn't show any events in New Hampshire until Wednesday.

Monday night, Mike Huckabee dropped out from the Republican side, and Martin O'Malley dropped from the Democratic side. But even after bringing in less than 2 percent of the vote, Fiorina has said she won't suspend her campaign for the White House. (Video via Fox News)

New Hampshire's caucus voting begins Feb. 9. Fiorina, according to several recent polls, is expected to bring in around 2 to 5 percent of the vote.