Migrant Caravan Could Wait Months Before Applying For Asylum In Texas 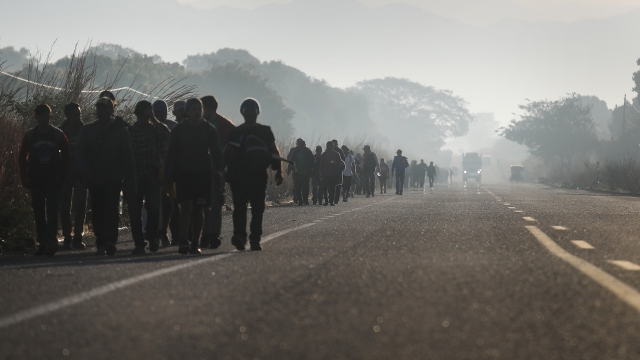 SMS
Migrant Caravan Could Wait Months Before Applying For Asylum In Texas
By Briana Koeneman
By Briana Koeneman
February 7, 2019
A caravan of nearly 2,000 Central American migrants arrived at the U.S.-Mexico border this week, hoping to apply for asylum in the town of Eagle Pass.
SHOW TRANSCRIPT

A caravan of nearly 2,000 Central American migrants arrived at the U.S.-Mexico border this week, hoping to apply for asylum in the small Texas town of Eagle Pass. But they might have to wait a while before that can happen.

U.S. Customs and Border Protection officials told NBC agents in Eagle Pass can only process about 20 asylum seekers per day. And the outlet says there aren't currently any plans to send more officers to help with the asylum procedures, which include administering a credible-fear interview.

The situation in Eagle Pass isn't unique. Thousands of migrants who arrived at the border crossing near Tijuana in November were told they've had to wait weeks, possibly months, before getting to apply for Asylum. The U.S. allows 40 to 90 people to apply for asylum each day at that port of entry.

And the U.S. asylum system has faced a backlog for some time. In December, the Department of Homeland Security said it was working through a backlog of more than 786,000 pending cases.

The Pentagon said Wednesday it was moving roughly 250 active duty military personnel to Eagle Pass in anticipation of the caravan's arrival. Those troops include medical personnel and military police.

Department of Homeland Security Secretary Kirstjen Nielsen said in a statement that illegal entry by the "lawless" caravan "will not be tolerated, and we stand ready to prevent it."