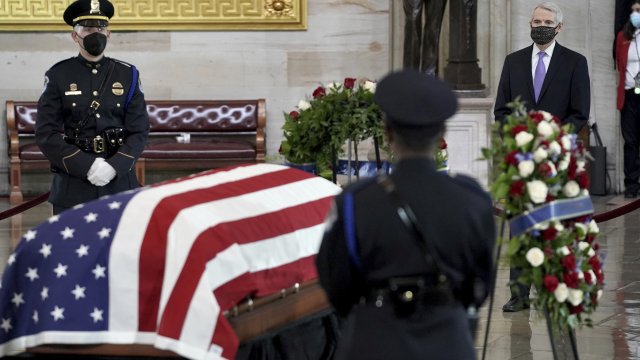 Honoring a life cut short in a senseless tragedy. Capitol Police Officer William "Billy" Evans lay in honor at the Capitol Rotunda Tuesday, less than two weeks after a driver hit and killed him as he guarded an entrance to the Capitol.

It's the second time in recent months the Capitol Police have honored one of their own in this way following the death of Officer Brian Sicknick earlier this year.

Officer Evans served for 18 years on the force and is only the sixth person to lie in honor. Just four police officers, plus Rev. Billy Graham and Rosa Parks, have their names on this sacred list. The toll this is taking on fellow officers was palpable. The President honored Evans, acutely aware of what this loss means for this family.

Evans' family said in a statement, "Billy was proud to be a United States Capitol Police Officer. His colleagues from the North Barricade were the people he spent so many hours with, and their friendship was one of the best parts of his job."

Evans' death is renewing calls for discussion on how to make the Capitol more secure. This could include more officers and possibly additional fencing.