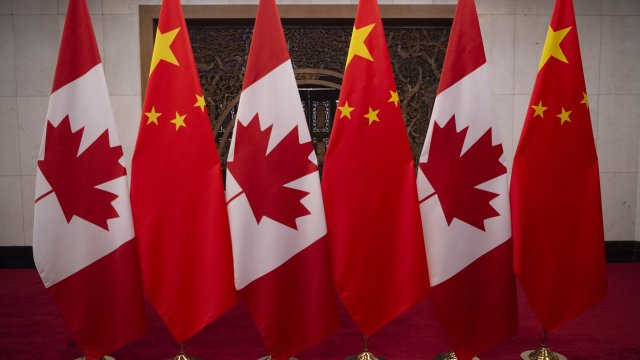 SMS
Canada's Consulate In Hong Kong Suspends Travel For Local Staff
By Austin Kim
By Austin Kim
August 23, 2019
Amid China's efforts to crack down on the Hong Kong protests, Canada's consulate is prohibiting its local staff from traveling outside Hong Kong.
SHOW TRANSCRIPT

The Canadian consulate in Hong Kong is suspending business travel for local staff, which includes work trips to mainland China.

A spokesperson for the consulate confirmed the policy change to Newsy, though did not give a reason for the move. But the change comes after China detained a U.K. consulate employee who reportedly has pro-Hong Kong views.

The Canadian consulate employs both Canadian diplomats and local staff who are Hong Kong residents. This travel suspension only applies to the local staff.

Canada and China have had a tense relationship of late. Canada arrested Huawei executive Meng Wangzhou in December over a series of charges. Soon after, China detained two Canadian businessmen and accused them of endangering China's national security.

Canadian Prime Minister Justin Trudeau has publicly urged China to show restraint in regard to the Hong Kong protests. But a Chinese foreign ministry spokesperson accused Canada of making "incorrect statements" and said the Hong Kong situation is an "internal affair."