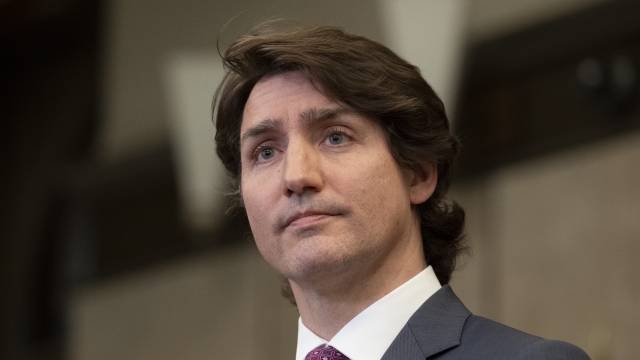 Prime Minister Justin Trudeau invoked emergency powers Monday to quell the paralyzing protests by truckers and others angry over Canada's COVID-19 restrictions, outlining plans not only to tow away their rigs but to strike at their bank accounts and their livelihoods. 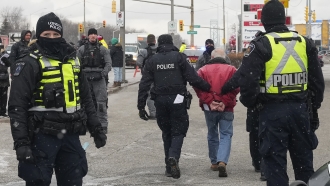 “These blockades are illegal, and if you are still participating, the time to go home is now,” he declared.

His government instead threatened to tow away vehicles to keep essential services running; freeze truckers' personal and corporate bank accounts; and suspend the insurance on their rigs.

Freeland, who is also the finance minister, said the government will also broaden its anti-money-laundering regulations to target crowd-funding sites that are being used to support the illegal blockades.

Trudeau did not indicate when the new crackdowns would begin. But he gave assurances the emergency measures “will be time-limited, geographically targeted, as well as reasonable and proportionate to the threats they are meant to address." 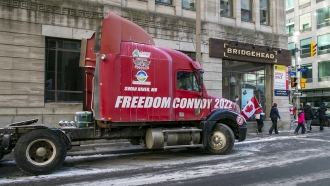 For more than two weeks, hundreds and sometimes thousands of protesters in trucks and other vehicles have clogged the streets of Ottawa, the capital, and besieged Parliament Hill, railing against vaccine mandates for truckers and other COVID-19 precautions and condemning Trudeau’s Liberal government.

Members of the self-styled Freedom Convoy have also blockaded various U.S.-Canadian border crossings, though the busiest and most important — the Ambassador Bridge connecting Windsor, Ontario, to Detroit — was reopened on Sunday after police arrested dozens of demonstrators and broke the nearly week-long siege that had disrupted auto production in both countries.

Cadalin Valcea, a truck driver from Montreal protesting for more than two weeks, said he will move only if forced: “We want only one thing: to finish with this lockdown and these restrictions.”

Over the past weeks, authorities have hesitated to move against the protesters. Local officials cited a lack of police manpower and fears of violence, while provincial and federal authorities disagreed over who had responsibility for quelling the unrest.

The demonstrations have inspired similar convoys in France, New Zealand and the Netherlands. U.S. authorities have said that truck convoys may be in the works in the United States.