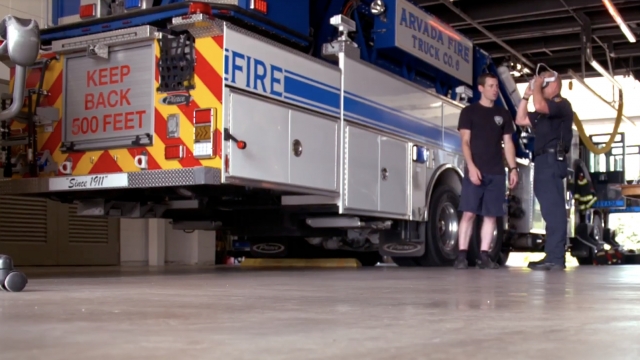 The state of pediatric emergency care in the U.S. needs help: audits over the past few years have found inconsistency in care -- could VR solve that?

Tucked back in the mountains of Boulder, Colorado, scientists at the National Institute of Standards and Technology, or NIST, suit up.   It feels odd to connect virtual reality and the home of the atomic clock to saving kids’ lives. But here, blind spots in pediatric emergencies are coming into view.

Training for pediatric emergencies is challenging because they’re rare and doctors and EMTs get little real-life experience.

Robert Putfark. EMS Captain, Arvada Fire Department: "When's the last time any of our, you know, literally any of our paramedics or EMTs have run a cardiac arrest on a kid less than 10? We had to last year. And I have sixty five paramedics."

Children make up only about 20 percent of ER cases nationally. It means responders rely on opaque mannequins and once-a-year training for the high-stress real thing.

"We really need to know what we're doing and have it in our frontal cortex and be able to respond immediately, because if you don't identify these subtle signs and symptoms that the little ones manifest, it can be catastrophic."

That’s where VR comes in.

This is the result. Through VR headsets, their app presents different high-stakes pediatric emergencies where you lead a team in resuscitating an infant or child.  And NIST-they’re studying how effective VR could be as a standard for training.

This technology came from the video game world. Designers rely on something called a non-playable character that's an A-I run character through the goggles, that a first responder interacts with as if it were a real life patient.

In the headset, you're really in it. Hearing the child, seeing the parent, interacting with an A-I partner, getting quizzed on how to respond.

Dr. Gillett: As Lindsey moves around the child, he's going to track her with his eyes.

Dr. Gillett:  That's a clinical finding that's really important. That shows that they're they're having a normal cognition.

VR could help with implicit medical bias, too. One study found that White children were more likely to receive diagnostic imaging during ER visits than Black and Hispanic children.

"It can be very difficult to recognize paleness in a light-skinned child. Another serious manifestation of critical illness is sort of a bluish discoloration that you'll get around kind of your lips. And sometimes when your fingertips and feet of an infant, that can be difficult to identify in a dark-skinned child," Brian Gillett, Emergency Medicine Physician and Co-Founder, Health Scholars said.

That goes beyond a pediatric emergency: Natural disasters, mass casualty events -- instances that a first responder may never have to deal with, but needs to be prepared for.

The pandemic has more departments investing in VR technology, Scott Ledgerwood with NIST says. It’s a cheaper alternative to large-scale disaster training -- for example this plane crash scenario required every three years by the FAA.

"These events can be upwards of fifty thousand dollars a day for a single event. And so it's really hard, you know, just to be able to train on that based on the frequency and the cost associated with it," he said.

“It seems like it changes as we go through it instead of looking at the same rubber mannequin," a team member said.

For now, it's an extra tool to brush up on skills, on top of in-person training.

"If you had someone who was skeptical of virtual reality, what would you say? And I'd say put on a headset. Right. Put yourself in that it literally is an immersive environment of, oh, there's a person there and oh, there's a baby there. And oh, I have to make some decisions. I think it's very beneficial," Putfark said.