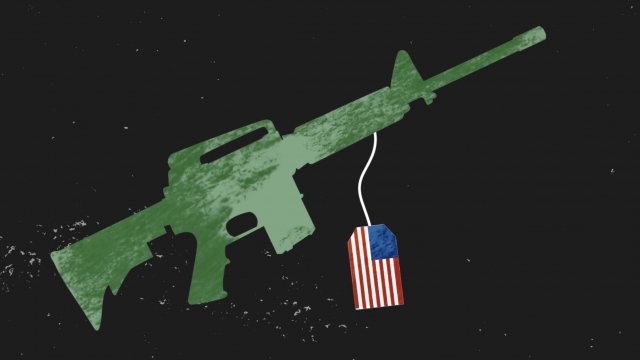 "Weapons are by their very nature lethal. They are not smart; they do not discriminate between a civilian and a soldier," Rachel Stohl, managing director of the Stimson Center, told Newsy.

Stimson, along with the Center for Civilians in Conflict, recently released a report on how the U.S. could change the way it sells arms to other countries to minimize the risk of civilian casualties from those weapons.

Most countries that can make and sell arms do just that. From actual guns to tanks to missiles, it's not an unusual practice. And America is the big daddy when it comes to that industry.

According to at least one tally, in 2016 the United States owned 29 percent of the entire global market for arms sales; that's almost $10 billion. And from 2011 to 2015, that market share averaged 33 percent.

At the same time, in 2016, armed conflict in at least 34 countries is estimated to have killed 102,000 people. Those conflicts also destroyed schools and hospitals. And America sold arms to 27 of those countries. So, why do we do it?

"It helps the economy. It's politically, sometimes an attractive choice. We can try to exert influence over another country’s behavior. We can develop partnerships and allies. We can reduce the burden on US forces that are operating abroad," Stohl said.

But once those weapons are out of your hands, there's always the chance they can make their way to bad actors or other countries, or just be used in a way the United States didn't intend. In one report, the United Nations found "high levels of arms and ammunition in circulation, combined with poor controls on them ... facilitate violations of international humanitarian and human rights law."

It’s the responsibility of the seller to make sure that doesn't happen — to make sure the weapons are used per the agreement and in accordance with both U.S. and international laws, standards and regulation.

And organizations like Stimson and the Center for Civilians in Conflict are doing some of the work behind the scenes to help minimize that risk, including giving our government advice.

"The U.S. can work with other governments to train them how to properly target, what are acceptable uses of weapons, what the laws of armed conflict are. A lot of it is internal processes; ensuring that when we sell weapons, we know who we're selling them to, we know what they're going to be used for and ensuring they're used appropriately," Stohl said.