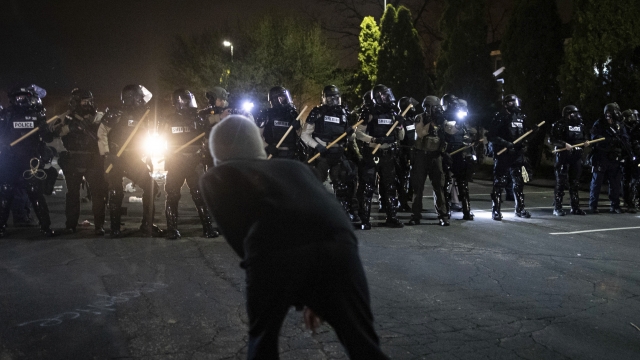 Police releasing a portion of the body camera footage from the shooting that killed Daunte Wright.

"It is my belief that the officer intended to deploy their taser but instead shot Mr. Wright with a single bullet," Chief Tim Gannon of the Brooklyn Center Police Department said.

"It's always an excuse for killing our people. And at this point, we don't know what to believe," Toshira Garraway with Families Supporting Families Against Police Violence said.

Outside the department, outrage. Activists want the police chief out, following the city manager who was fired late Monday. The mayor joining those calls for the senior officer involved to lose her job. For now she's on administrative leave while the Minnesota Bureau of Criminal Apprehension investigates.

"They should be charging this officer with murder. With murder," Jaylani Hussein, the executive director of the Council on American-Islamic Relations, Minnesota, said.

Police slammed for militarizing their response to demonstrations.

"All of this militarization is here to protect killer cops, not to protect people," Hussein said.

These leaders exasperated to see another Black American dead at the hands of police.

"I have a wife and a career I love and I'm able to speak today, three things Dante can never have," Matt Branch, an activist, said.

Leaders worry the outrage could again turn to violence. In a nearby shopping center Monday, businesses were picking up the pieces looters left behind.

"Since the original riots, we've bought up like 70, 80 sheets of plywood," Paul Ellingboe of Domino's Pizza said.

Unconcerned about more violence even as this city sits on the verge of uproar.

"I have a son that is only a couple years younger than Dante. And all I can think about is my son," Garraway said.