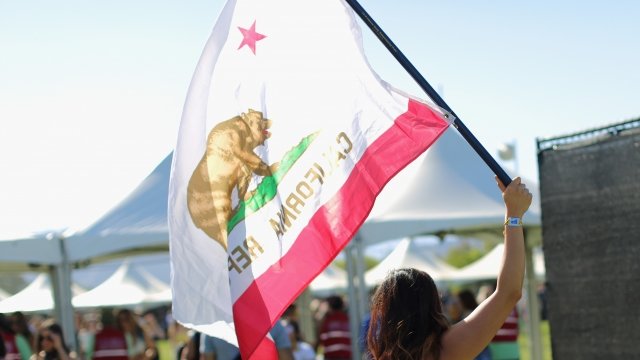 After Donald Trump won the presidency, a movement to break California from the U.S. and form its own country has gained traction.

A few years ago, only 1 in 5 Californians supported secession. Today, it's 1 in 3.

The leader of the so-called Calexit campaign actually lives ... in Russia. And his movement has murky links to the Russian government.

Speaking to Newsy on video chat from his home in Yekaterinburg, Russia, Yes California leader Louis Marinelli said: "I support things like universal health care and universal education. Those are things that this campaign believes we can only achieve as an independent country. Once we stop subsidizing the other states to the tune of billions of dollars every year and once we stop subsidizing the American military to the tune of tens of billions of dollars a year, that money combined is enough money for California for universal health."

Although his pitch is aimed at progressives, Marinelli was a registered Republican until he co-founded the Yes California campaign a couple years ago. Despite, advocating for liberal polices, Marinelli says he voted for President Trump.

"I voted for Donald Trump because I felt that he would definitely help our movement, and I wanted to have someone in the White House that would be representative of the American psyche, the American culture we're trying to break away from," he said.

Yes California opened an "embassy" in Moscow, reportedly with the help of a Russian-funded group that aids secession movements. The opening was highlighted on Russian media outlets.

But Marinelli declined to call it an embassy. In the past, we had a cultural center in Moscow to present California history and culture, but it closed. Many supporters of Calexit wanted it closed; it was divisive.

According to experts on Russia, division is what the Kremlin is going for — whether it's dividing the European Union, NATO, or even breaking up the United States. In fact, last year the Kremlin helped fund a gathering of secessionists from around the world in Moscow. Marinelli was there to represent the California secessionist movement.

Calexit is a long shot at best. More than half a million signatures are needed to prompt a referendum that would be largely symbolic. And, eventually, the U.S. Congress would have to approve letting go of California by a large margin. But the movement hopes to be the next unlikely victory against establishment politics that bring the fringe into the mainstream.