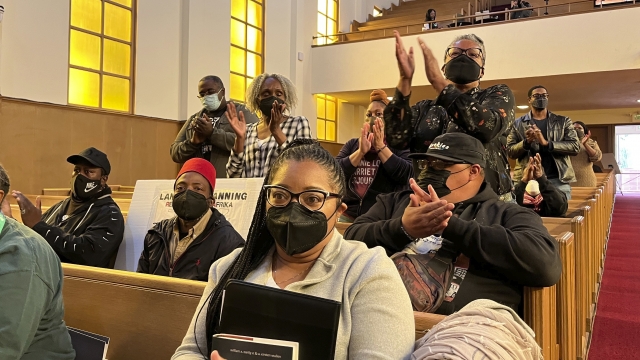 SMS
California Panel Recommends Reparations For Black Residents
By James Packard
By James Packard
June 2, 2022
An interim report is telling lawmakers in Sacramento they should consider how to pay back descendants of enslaved people.

A California panel is recommending a slew of changes as it studies how Black residents should be compensated for the lasting scars of slavery and segregation.

An interim report is telling lawmakers in Sacramento they should consider how to pay descendants of enslaved people.

The panel is also recommending programs to get Black people registered to vote and keep them on the voter rolls; programs to repay Black land and business owners for value lost in racial terror; programs to get students free tuition; and programs to house vulnerable populations. Plus, the panel wants lawmakers to allow incarcerated people to vote, make mental health care and rehabilitation a first priority for inmates and pay them for their work while in prison.

The panel has so far logged hours of testimony, hearing from experts on and victims of racist systems, all with ideas on changing California's approach to housing, policing and education.

The report is a tentpole in a national conversation about how to amend a racist legacy more than four centuries in the making and put Black Americans on a truly level playing field whether it be land reparations, education subsidies, checks or all of the above.

"Today we have more in the arsenal to discuss this issue besides just slavery," Detroit historian Jamon Jordan said.

Experts are holding diverse ideas about how to close race wealth, education and land ownership gaps.

"We could give an income tax holiday to Black Americans," Northwestern University political science professor Alvin Tillery said. "That would do an incredible amount of good and that would also stimulate the economy."

On a national scale, the history of reparation payments is dotted with failed programs and lackluster amounts. Some think reparations aren't about the money at all.

"We've seen a number of structural governmental policies that have helped particular groups find their way to saving money, to creating wealth, to building wealth, to buying property, to starting businesses and sending their children or themselves to college," Washington University history professor Douglas Flowe said.

A renovation of our national floor plan to put us all at the same table.