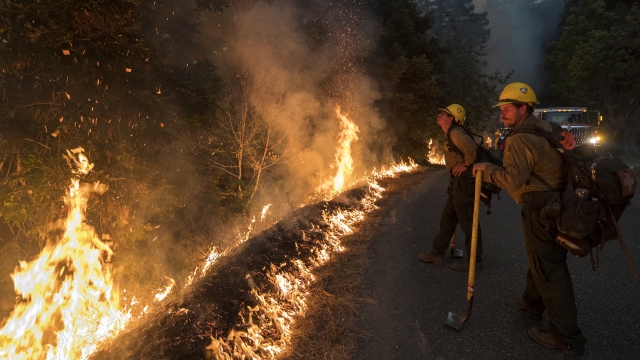 SMS
California Lawmakers Push For Bill That Would Support Firefighters
By James Packard
By James Packard
May 20, 2022
In California, lawmakers are trying to dramatically increase staffing for the state's firefighting agency.

As wildfires burn from California to New Mexico to Texas, a young wildfire season is already aggressive.

And for the ones charged with dousing the flames, it's exhausting.

"Arguably, empathy and compassion are two of the greatest strengths that we bring to the job. But those are pathways for injury," Responder Strong Founder Rhonda Kelly said.

In California, lawmakers are considering measures to dramatically increase staffing for the state's firefighting agency, desperate to relieve the strain.

"We're going to hire extra firefighters to make sure that we're getting onto these fires sooner, safer, and more efficiently," State Sen. Brian Jones said. "This is a main responsibility of government to keep us safe."

Jones is one of the authors of the bill, which just passed a Senate committee Thursday.

If it gets the governor's signature, it would add more than 1,000 firefighters to the state's roster.

"Those firefighters are fighting fires for 24, 48, 72 hours with no relief," Cal Fire Firefighters Local #2881 Vice President Patrick Walker said. "Bringing in fresh firefighters allows them to rest, start back over and continue that aggressive assault."

It would also make it a constitutional requirement to give the agency more robust funding.

This kind of strain is no stranger for firefighters in wildfire-prone states.

In Boulder, Colorado, Lt. Tyler Capron leads a support group for firefighters to make sure they get help when they need it.

"Early on, it was not as easy to talk about calls that affected me," he said. "It's one thing to say that, 'I'm here for you.' It's another to feel that support. It's okay not to be okay. It isn't okay not to reach out, though."

As climate change lengthens and intensifies fire season, first responders coast to coast will need the support to keep going.

"It's a year round fire season, that's what we say now," Walker said. "We need that year round staffing."