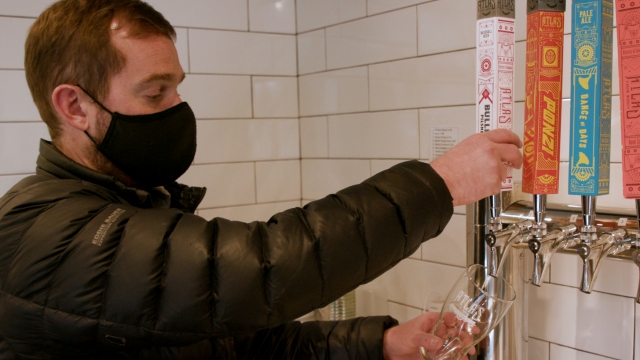 A Newsy investigation finds more than half a million businesses unable to borrow more money from an SBA loan program that has plenty left to give.

Beer stopped flowing at Atlas Brew Works in Washington when the pandemic hit.

"Our business fell by more than half almost overnight," said founder and CEO Justin Cox in an interview at his brewery and tap room across from the Washington Nationals baseball stadium.

For his business to survive, Cox needed cash and traditional loans weren't an option.

"Banks just stopped making loans, especially to people in the food and beverage industry," he said.

Cox applied for an Economic Injury Disaster Loan from the Small Business Administration.

He was disappointed to learn, unlike other disasters where you could borrow up to $2 million, the SBA last April capped COVID-19 loans at $150,000.

"It certainly was not nearly enough for our business and a lot of other small businesses," Cox said. "But something is better than nothing."

A Newsy investigation and data analysis of SBA records found Atlas was one of at least 567,215 business to hit the $150,000 maximum since it went into effect.

The SBA administrator under President Trump said the cap was necessary to fan out loans quickly to as many places as possible.

"It was a matter of realizing we had over 5 million applications in the queue," former SBA administrator Jovita Carranza said at a U.S. Senate hearing last June.

Yet a year into the pandemic, the Economic Injury Disaster Loan program is running a massive surplus: $271.6 billion, according to the SBA.

And that was before Congress injected another $15 billion from the new stimulus law.

The SBA, with a new administrator sworn in Monday, is "currently re-examining" the $150,000 loan maximum, an SBA spokeswoman told Newsy.

A decision on whether to lift the cap has been made with an announcement coming before the end of the month, she said.

"If the SBA wants to expand the program, we absolutely would go back to them," he said.

The extra revenue would help him buy more aluminum to can his beer and staff up ahead of what he hopes will soon be a full reopening.

"I'm feeling optimistic," Cox said. "But we're still not there."