The Brunei Hotel Boycott Highlights The Struggles Of LGBTQ Travelers 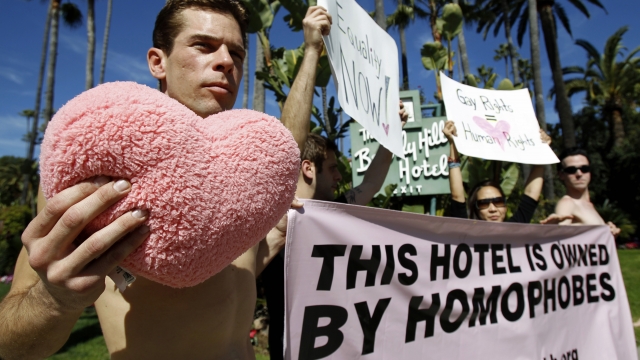 SMS
The Brunei Hotel Boycott Highlights The Struggles Of LGBTQ Travelers
By Casey Mendoza
By Casey Mendoza
April 8, 2019
Activists and celebrities are boycotting hotels owned by the leader of Brunei — a country that penalizes same-sex intercourse with death.
SHOW TRANSCRIPT

Human rights advocates, LGBTQ activists and Hollywood celebrities are boycotting hotels owned by the Sultan of Brunei. Earlier this month, the country put in place a law that punishes same-sex intercourse with death by stoning.

The hotel boycott has already led some major organizations to move events out of the sultan-owned Beverly Hills Hotel. And some travel agencies and airlines have also cut ties with Royal Brunei Airlines.

"I think it's great, because it's bringing even broader visibility to this issue. And so we can only encourage this kind of initiative from celebrities, because now it's all in the press. ... So I think it has made some good things around the situation."

That's Matthieu Jost, one of the co-founders of misterb&b, a company that helps LGBTQ travelers find welcoming hotels and hosts all over the world.

He says the recent hotel boycott not only puts pressure on the Brunei monarchy and its business partners — it also highlights the difficulties faced by openly gay travelers.

"Even in some very — what can look like some very open countries or cities around the world, there is still homophobia and bias against the LGBT community. And so this is why I created misterb&b: to be able to provide safe and welcoming [accomodations] for my community."

Misterb&b hosts must agree to a charter saying they welcome LGBTQ guests, but for the safety of their travelers, the company doesn't list hotels or hosts in openly hostile countries like Brunei.

Scruff's CEO told MarketWatch, "Part of our mission here is to keep our members safe and informed when they travel, but also increase global pressure for reform."

It's not clear if that pressure will actually spur reform, but it's worth noting that LGBTQ people alone spend more than $200 billion on travel each year.