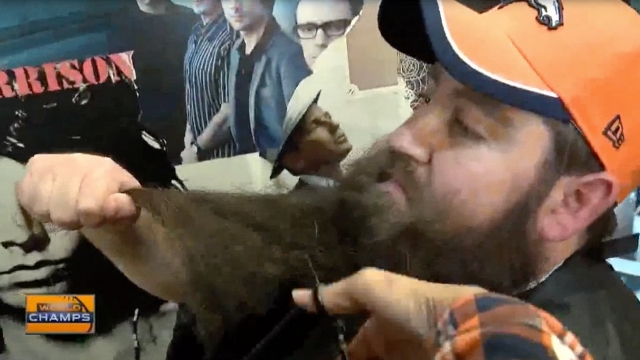 We've heard of playoff beards before, but this is ridiculous.

Newsy's partners at KMGH report that ever since the Denver Broncos lost in Super Bowl XLVIII two years ago, Broncos fan Michael "The Beard" Bowen vowed not to shave his beard until his team won the Super Bowl.

And thanks to the Broncos defense smothering the Carolina Panthers a few weeks ago, Bowen only had to wait until Super Bowl 50. The Broncos beat the Panthers 24-10, so Bowen went to the barbershop.

"It was fun while it lasted, but, yeah, that's too long," Bowen said.

And the finished product? There you go.

Wait — are we sure that's the same person? That's some serious shaving, bruh.

Bowen said he's interested in donating those locks if they can go to someone in need. He also doesn't have any more beard-related bets set up at the moment.