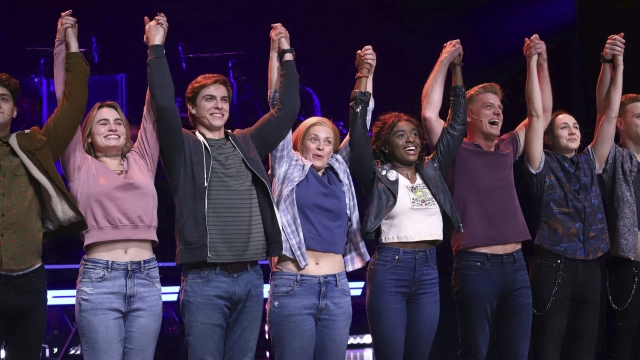 SMS
Broadway Reopens Doors After Yearlong Shutdown
By Casey Mendoza
By Casey Mendoza
September 13, 2021
When theaters reopen to full capacity on Sept. 14, audiences will be masked and required to show proof of vaccination.
SHOW TRANSCRIPT

For the first time in over a year, Broadway in New York reopens this week to full-capacity.

"We're doing all that we can to bring live performing back, and it's a two-way street," actor Derek Klena said. "It's an audience and a performing company, and we look forward to that marriage once more."

Klena was working on "Jagged Little Pill" when the pandemic shut down theaters across the country.

"It was so unexpected. Leading up to the shutdown, I actually had COVID the last four performances leading up into the show shutdown," Klena said. "I didn't know at the time."

The Tony-nominated show set to the music of Alanis Morissette returns on October 21 — with rehearsals starting again later this month.

"We're well on our way," Klena said. "It looks like a large majority of our original cast is able to come back to the show, which is very exciting."

After a year off-stage, Klena says the pandemic shows just how resilient artists in the industry are.

"It kind of pushed everyone's reset button and really emphasized why we do what we do and what about it we love," Klena.

But that doesn't mean returning to the spotlight will be easy.

Actor Ethan Slater is best known for his Tony-nominated role as Spongebob in "The Spongebob Musical," and his first live performance back will be at Times Square for the Broadway Buskers concert series.

"I'm nervous about it in a couple ways," Slater said. "I mean, obviously, there's like the practical COVID ways. But I'm also just nervous about it, because this is maybe the longest I've gone without putting myself out there in front of an audience."

Klena said, "There was that like 'awkward turtle' in the room of people being like 'Do we remember how to do this? How's everybody feeling?'"

"I always get like dreadfully nervous before every performance, but there's something in the practice of it that makes it easier," Slater said. "So, we'll see!"

When theaters reopen to full capacity on Sept. 14, audiences will be masked and required to show proof of vaccination. Actors, crews and theater staff are also required to be vaccinated.

"We're obviously taking all of the safety precautions very, very seriously to create a safe space where people can allow themselves to release and relax," Klena said.

"People have been out of work and it's really tough," Slater said. "We need to find ways that it's safe to go back to work."