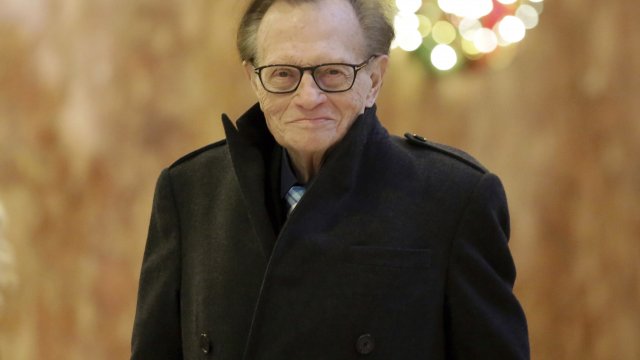 King passed away at Cedars-Sinai Medical Center in Los Angeles, according to his official Twitter account. No cause of death was given, but just weeks ago, he was battling the coronavirus in the hospital.

Best known for hosting CNN's "Larry King Live," King's career spanned six decades, across radio, television and digital media. He conducted some 50,000 thousand interviews, from the Dalai Lama to Lady Gaga, from Bill Gates to Yasser Arafat. He connected with presidents, celebrities and every men alike.

King's career began as a radio DJ in Florida in the late 1950s. He first gained notoriety in 1978 with the debut of his nationally syndicated late-night radio talk show, "The Larry King Show", for which he won a Peabody Award. In 1985, "Larry King Live" premiered on CNN. It became the network's longest running program, lasting for 25 years until 2010. King also worked as a columnist for USA Today for more than 20 years.

He came out of retirement in 2012 to host his talk show "Larry King Now" on the digital TV network he co-founded, Ora TV. He also began hosting "PoliticKING with Larry King" in 2013.

After suffering a major heart attack in 1987, King founded the Larry King Cardiac Foundation to help pay for life-saving cardiac procedures for those who couldn't afford them. But he was dogged by health challenges later in life.

King was diagnosed with prostate cancer in 1999, and lung cancer in 2017. He recovered but was treated again in 2019 for angina - severe chest pains caused by inadequate blood supply to the heart.

King was married eight times - to seven women. He once said, "I'm not good a marriage, but I'm a great boyfriend." He is survived by five children.