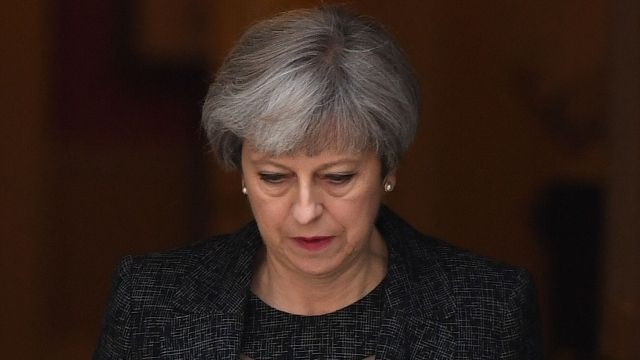 SMS
Brits Are Upset With The Prime Minister's Response To The London Fire
By Grant Suneson
By Grant Suneson
June 17, 2017
Theresa May is facing criticism for not meeting with Grenfell Tower fire survivors and dodging questions about who's responsible.
SHOW TRANSCRIPT

Many in the U.K. are upset with Prime Minister Theresa May for her response — or lack thereof — to the Grenfell Tower fire.

British outlets said May struggled to offer support or leadership in the wake of the blaze, accusing her of lacking emotional intelligence and calling her "Maybot".

Queen Elizabeth II visited West London to meet with those who were affected by the fire, as did Labour Party leader Jeremy Corbyn.

But when May went to the site of the fire Thursday, she stayed for only 15 minutes, declining to meet with any survivors or families.

And after taking heavy criticism, she came back Friday and was faced with angry crowds shouting at her.

Some of the anger stems from reports that Grenfell Tower had no central sprinkler system and was built with flammable materials that residents told the government needed to be fixed.

Residents say they were ignored and want the government to take responsibility. But in an interview about the fire, May ducked the questions.

"There's a need for the public to hear you say in words of one syllable: 'Something terrible has happened; something has gone badly wrong. It is our fault,'" Emily Maitlis said to May in an interview.

"Something terrible has happened. This is an absolutely awful fire that took place," May said.

At least 58 people are dead or presumed dead after the blaze.