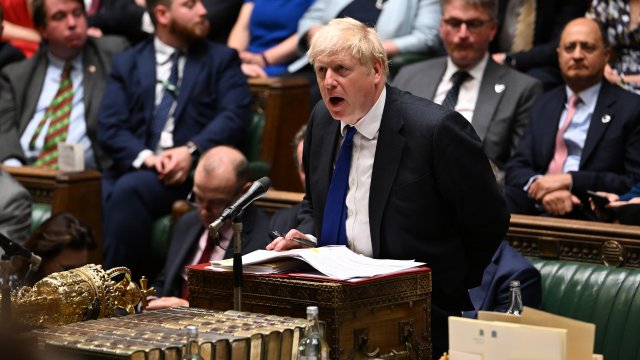 Faced with blistering criticism in Parliament and growing calls for his resignation, British Prime Minister Boris Johnson is vowing to stay on.

“Mr. Speaker, the job of a prime minister in difficult circumstances, when you've been handed a glottal mandate, is to keep going and that's what I'm going to do," Johnson said.

The resignations of two of Johnson’s cabinet ministers Tuesday along with a string of junior officials intensified the push to force him out office.

“As for those who are left only in office because no one else is prepared to debase themselves any longer, the charge of the lightweight brigade, have some self-respect," said Keir Starmer, U.K. opposition leader.

In recent months, the prime minister has been fined by police and harshly criticized in an investigator’s report for holding government parties that violated the country’s COVID-19 restrictions.

Johnson survived a no-confidence vote last month, but 41% of his conservative party lawmakers voted to oust him then.

The prime minister’s shifting explanations about how he handled sexual misconduct allegations against a senior conservative lawmaker was the last straw for the treasury chief and health secretary.

"We had the Sue Gray report, a new Downing Street team, I continued to give the benefit of the doubt," said Sajid Javid, former British health secretary. "Now this week again, we have reason to question the truth and integrity of what we've all been told. At some point, we have to conclude that enough is enough. I believe that point is now."

There was some humor, but the lawmakers’ message was serious.

"A few weeks ago, I compared the prime minister to Monty Python’s Black Knight; actually turns out I was wrong," said Ian Blackford, Scottish National Party leader. "He’s actually the dead parrot. Whether he knows it or not, he’s now an ex-prime minister, but he will leave behind two deeply damaging legacies. I hope the dishonesty of his leadership follows him out of the Downing Street door."

Three years ago, Johnson came into office in a landslide, with a promise he kept to take Britain out of the European Union.

A snap YouGov poll now finds 69% of Britons think he should step down.

Under current conservative party rules, 12 months must pass before there is another formal leadership challenge, but the rules are made by a party committee that could decide to change them.