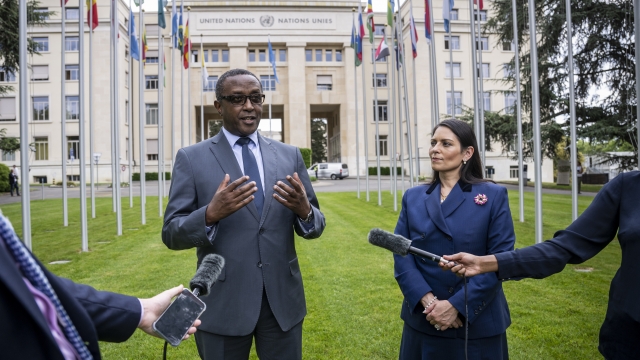 Amid the war with Russia, Ukrainian refugees are drawn to the U.K. because there is a substantial Ukrainian population there.

The U.K. government has struck a deal with Rwanda.

The U.K. paying for all people seeking asylum who are deemed to have arrived illegally to be sent to the central African country for processing.

Priti Patel, the Home Secretary, made a recent trip to Rwanda to sign the contract and to examine the accommodation.

"Those who travel to the U.K. by illegal and dangerous routes may be relocated to Rwanda, where they will have their asylum claims considered," she said.

But for these London-based Ukrainian volunteers, some of them refugees, there is concern.

As Newsy was filming at this support hub, an undocumented Ukrainian family arrived to ask for advice. They, understandably, didn't want to be filmed.

He says he knows a large number of undocumented Ukrainians living in London and the community as a whole is concerned.

"I can't imagine taking me to another continent with a different culture, so far away from everything I know and leaving my life here," Valeria Titkova said. "I don't think any of us would want to be in that situation so why should we be putting these people in that situation."

The reason Ukrainian refugees are drawn to the U.K. is, in large part, because there is a substantial Ukrainian population there. But due to an administrative backlog, many visa applications are yet to be processed. It's meant some have decided to enter the U.K. via the back door.

Ireland lifted visa requirements for Ukrainians, meaning refugees who arrive there can enter the U.K. via northern Ireland, through the open border arrangement.

Could undocumented Ukrainians who have entered the U.K. illegally be sent to Rwanda for processing? The government has confirmed that this is technically how the system could work — which is something that has been welcomed by some members of parliament in Boris Johnson's Conservative party. A system, they believe, will deter illegal immigrants.

Andrew Bridgen is a conservative member of Parliament who supports the government's Rwanda plan.

"I think it's going to serve as a huge deterrent," he said. "We're going to have laws to make it easier to deport foreign criminals and I think it is important that included in those foreign criminals, are people who have committed the criminal act of entering the U.K. illegally and undocumented."

But Patel told Newsy the U.K.'s Ukrainian visa program makes it unnecessary for Ukrainians to travel there illegally in the first place, and didn't acknowledge that this could be a problem.

"Ukrainian nationals in the U.K., there is no reason why they should be undocumented," Patel said. "They are here legitimately and legally."

But if they are undocumented?

"One, through our visa route and secondly, through their status in the U.K.," Patel said. "The other point about Rwanda, which is a migration and economic development partnership, is it actually addresses the wider issue about illegal migration."

The government designed the policy to deter migrants who take the dangerous decision to travel across the English Channel.

The fact that it also applies to undocumented Ukrainians may be an unintended but extreme consequence of this new law.