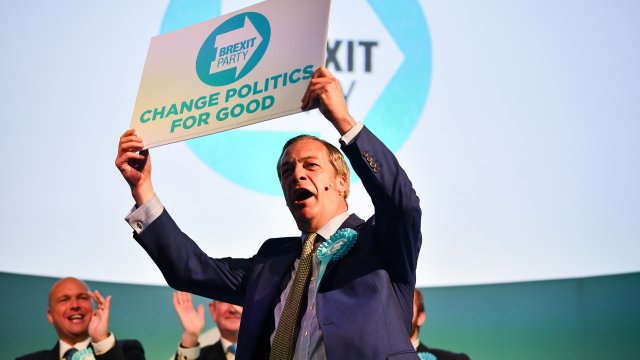 SMS
EU Elections Mean More Brexit Feuding For The UK
By Matt Picht
By Matt Picht
May 22, 2019
Elections for the European Parliament have given third parties in the U.K. a chance to win support for their Brexit messages.
SHOW TRANSCRIPT

Brexit has become the dominating issue of the European Union parliamentary elections in the U.K. The country's major political parties are falling behind smaller parties with hard-line views about whether the U.K. should leave the E.U.

The E.U. elections use a system that allows smaller parties to make a bigger splash — and plenty of small parties are taking full advantage to promote their Brexit platforms.

Nigel Farage, the former leader of the pro-Brexit UKIP Party, launched his new Brexit Party specifically for this election. The party's simple mandate — deliver Brexit at all costs — has propelled it to the top of the polls. It could earn around 25 of the U.K.'s 73 seats in the E.U. parliament.

Of course, the anti-Brexit side is out in force for this election as well.

The once-miniscule Liberal Democrat party has been surging in the polls as well thanks to its strident opposition to Brexit. But it's splitting the anti-Brexit vote with a handful of other pro-EU parties — put together, those parties are expected to pick up about 21 seats in the E.U. parliament.

Brexit is currently stalled after U.K. Prime Minister Theresa May failed to win the British parliament's backing for the withdrawal agreement she negotiated with Europe. The U.K. Parliament has yet to find a Brexit plan it might get behind; the E.U. election could give politicians a barometer for which side of the argument has the most public support.

Ordinarily, the winners of the election would send their members to spend five years discussing E.U.-wide rules and laws in the bloc's 751-member legislature. But the new U.K. representatives to the European Parliament will lose their seats when the country exits the E.U. — which is currently scheduled to happen on Oct. 31 of this year.

Farage: "This is a battle we shouldn't be having to fight. But we are fighting it, and we are going to win it."