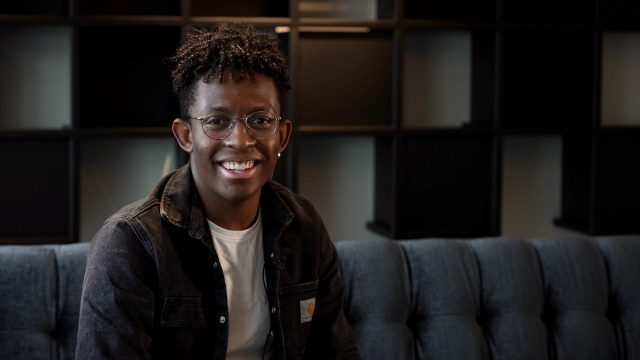 He's one of the music industry's newest phenomenons — mixing country, gospel and sometimes even rap. Artist Breland simply refuses to fit in a box.

"I don't think I have to pick what genre to be, and I think music is music," he said. "I think the more we can create that music without barriers, the better it is for society."

This bold, Jersey-born singer has introduced the world to a new type of country and rap mix.

Born into a music loving family, Breland's passion was cultivated from a very young age.

"My parents are singers. They met in the Howard gospel choir back in the eighties, and music has just been a really big part of my home. So I think growing up, I was kind of the weak link vocally," he said. "The first number one song I ever wrote on billboard was a gospel song for an artist named Corinne Hawthorne. And then I was featured on a song with Gary Locke from Rascal Flatts called 'All I See,' and that's a gospel song."

But before all the accolades, there was hard work —  a 9-to-5 job, then to the studio.

His path to stardom took a not so typical route. Cross country, one might say.

And after helping other artists write hit songs for years it was his turn to grab the mic.

In 2020, the Georgetown graduate burst onto the scene with a huge hit called "My Truck."

"My Truck kind of came out of me feeling like, 'OK, I've done a million R&B and hip-hop songs. Let me try something different,'" he said. "I think songs like My Truck and Old Town Road and you know, there's a few songs that have been playing around with genre and hip-hop and country in that way. And Nelly, he's been doing it for a really long time as well."

A cross between country and rap.

"I didn't really know exactly what I was doing or what the implications of what I was doing would be for the genre of country music and for how people interpret genre," he said. "But a lot of people now are kind of looking to that song as part of this new wave and country music where it's a much broader definition."

It's that limitless attitude that has made Breland a trendsetter, helping to push country music and other music types to evolve.

"Genre, historically, has always been based around race," Breland said. "So, if an artist like Leon Bridges and an artist like Chris Stapleton make the same type of music — or have songs that are very similar — because Chris is White, they're going to say that is country and because Leon is Black, they're more likely to classify it as soul. But both genres come from a common ancestor, right? And we all are influenced by a lot of the same things. But the way that we classify certain things has always been based around race."

His music is bold and his future is bright.

Breland says there's a whole world of opportunities out here. And just like his music, he plans to explore every possibility.