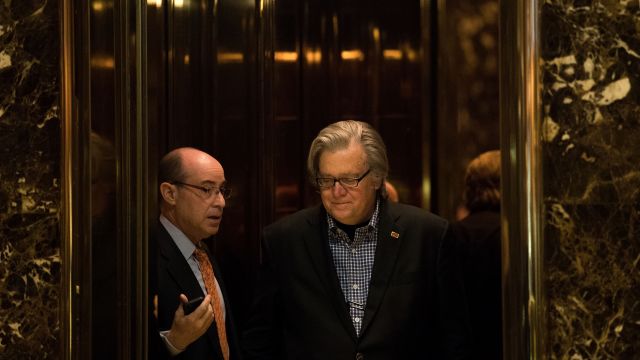 Bannon's best known for running the right-wing news outlet Breitbart. The site is infamous for its broadsides against birth control, Muslims and refugees.

Breitbart's also been linked to the alt-right movement, described by the Southern Poverty Law Center as "a rebranding of white nationalism." The Anti-Defamation League said the movement is made up of "unabashed anti-Semites and racists." Both organizations denounced Bannon's appointment.

Trump's top advisers defended Bannon by pointing to his military record and his former job as a Goldman Sachs executive.

Former House Speaker Newt Gingrich told Fox News, "They now want to come back and say that anything anybody ever published on Breitbart is Steve Bannon. That's baloney."

SEE MORE: Breitbart Might Have A Job Opportunity For Billy Bush

As for Breitbart, Trump's win has apparently energized the site. It's reportedly planning to expand its operations to Germany and France.