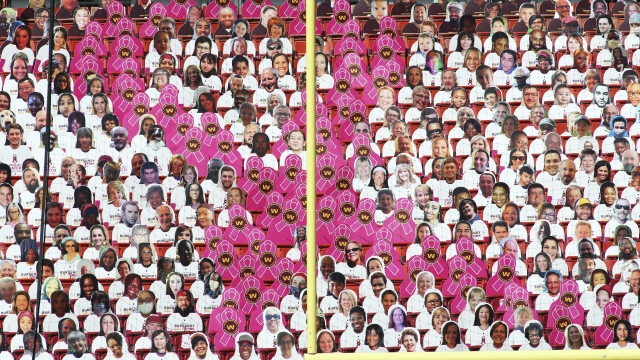 SMS
Breast Cancer Products Bring In Big Money — But To Whom?
By Bianca Facchinei
By Bianca Facchinei
October 18, 2021
There have been plenty of questionable products over the years, and there's no official record of how much money is raised through them, if any.
SHOW TRANSCRIPT

From pumpkin patches to changing leaves, orange is often associated with October. But there's another dominant color — one that brings in a lot of money each year: pink.

A pink ribbon, to be exact.

"Now we see it on everything. You see it on a fracking drill bit," said Gayle Sulik, author of "Pink Ribbon Blues."

It's the official symbol of breast cancer awareness, which is celebrated for the whole month. And it is hard to miss; it's on products at the supermarket, clothing stores, even your favorite football team's uniforms.

There's good reason for all this awareness.

Breast cancer in women accounts for 19.8% of all cancer deaths, second only to lung cancer. But breast cancer research receives the most federal funding — almost $575 million, compared with lung cancer's $350 million. That doesn't include money that may have been used in clinical trials, either.

In an email to Newsy, the National Cancer Institute said its funding allocations are directed by congressional appropriations and offered us a link to its website without answering our request to address why the money is disproportionate.

In the end, despite all this funding, the private sector is still awash in pink for an entire month.

Sulik said breast cancer is such a money maker because "the focus on women's bodies is something that's really ripe for consumption, ... and then, with the pink ribbon, it kind of made it nice and pretty."

There have been plenty of questionable products and events over the years, and there's no official record of how much money is raised through them, if at all. Even if a portion of the proceeds are going to charity, it's not always clear whether it's a legitimate one.

"The government isn't actually allowed to demand a charity spend a minimum percentage of your donations on their programs," said Laurie Styron, executive director of Charity Watch.

So instead of going toward research for treatment or a cure, your donation could be lining the pockets of the organization's board. It also takes attention away from all of the legitimate charities putting in an honest effort to make a difference.

Experts blame predatory behavior, considering breast cancer is one of the most common illnesses among women in the U.S.

"Some of the questionable operators are particularly attracted to organizations that are popular because they know that people will respond to their requests and send money and donate," said Bennett Weiner, the executive vice president and COO of the Better Business Bureau's Wise Giving Alliance.

If you end up regretting a donation or purchase, it can be difficult to get that money back. That's why experts urge potential donors to research any charity before making a donation.

"No one owns the ribbon," Sulik said.