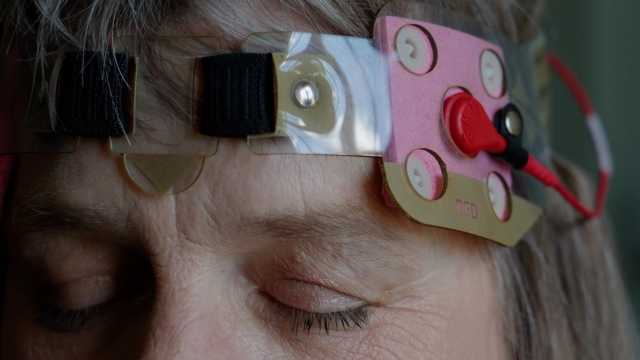 It looks a little "weird science."

But the headpiece that Susan Meiklejohn dons daily is giving her head peace— peace and relief from the deep, debilitating depression from which she has suffered most of her life.

SUSAN MEIKLEJOHN: I had a very, very stressful — overwhelmingly stressful — childhood. I had a violent father. And at 11, was the first time I had suicidal ideation.

NEWSY'S JASON BELLINI: How old are you now?

MEIKLEJOHN: 68. So, I've never gotten past the ideation phase. I've never attempted suicide. But I certainly have been enmeshed in that ideation.

Meiklejohn, a retired college professor and amateur artist, is one of nearly three million adults in America with depression that does not respond to medication. Now she's one of a very small group — just several hundred — trying an at-home medical treatment involving electrical stimulation of part of the brain.

BELLINI: How many medications have you tried? 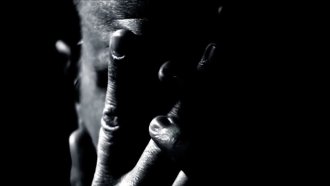 Why Aren't Mental Health Resources Available To Everyone?

So she tried ketamine—most commonly used in anesthesia—forking over $16,000 out of pocket to see whether the new psychedelic treatment, now being offered in hundreds of U.S. clinics, could provide her with some relief. It did, but not for long.

"It makes you feel great," Meiklejohn said. "So, that lasted for about three days. And then it's right back again."

Back again to suicidal ideation. Then, a few months ago, Meiklejohn heard about a new treatment protocol — one she could try at home.

It's provided by a team led by Leigh Charvet, who is a neuropsychologist at NYU Langone Health. She's pioneering research in transcranial direct current stimulation (tDCS) as a treatment for a wide range of neurological disorders, depression among them.

"I have to say, of all of our experience with tDCS, the response in the depression trial has been absolutely remarkable," Charvet said.

And the treatment is considered low-risk enough to let Newsy's Jason Bellinni try it, powered up.

At his lab, at the City College of New York, Marom Bikson develops cutting edge methods of "neuromodulation."

"Neuromodulation as a field is the use of devices to deliver energy in a controlled way to the nervous system to change the body," he said. "When you think something, when you feel something, it's all electricity. We're adding electricity into that mix. So, it's sort of, maybe not a surprise that an electrical organ is sensitive to electricity coming in."

BELLINI: What do you think is most exciting right now when it comes to this field generally?

MAROM BIKSON: One is more and more sophisticated technologies that can deliver energy to the nervous system in a more intentional and targeted way. So, more and more specificity.

To demonstrate, Bikson suited Bellini up for an experiment to see if targeted electrical stimulation can improve one's concentration while doing a boring, repetitive task.

BELLINI: Is there a sweet spot you're trying to hit?

"This electrode here is roughly over a part of your brain called the dorsolateral prefrontal cortex," Bikson said.

That's an area of the brain associated with problem solving, attention switching, memory management and inhibition.

BIKSON: Now, you're at the full current, can you feel it?

BELLINI: I feel the itchiness, that's for sure.

Itchiness, where the electrode touched Bellini's scalp, which he says went away within a few minutes. He had no other sensation beyond that.

As far as the game, as shown to Bellini in an analysis afterward, stimulation appeared to improve his performance a bit. Depression treatments target the same brain area as that experiment.

"We have developed a hypothesis that this energy may not directly affect the neurons of the brain, but actually affect the blood vessels in the brain," Bikson said. 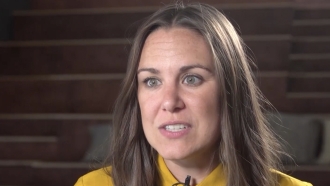 How Live Storytelling Is Helping People Cope With Mental Illness

They headed over to an MRI machine, where they set Bellini up to capture what the stimulation does inside his head.

The areas in red showed an increase in blood flow. But how that may impact people with depression and other neurological diseases remains a medical mystery.

BIKSON: It works, but it also works on the most difficult people, people who have been failed by conventional medicines.

BELLINI: But not everyone?

BIKSON: But not everyone. And then, there's the opportunity, right? Just like with medications, with neuromodulation, you're thinking, "How can I make this work better? How can I capture the people who did not respond? And even for the people who did respond, can I do better for them still?"

Today, another approach to stimulation, called "repetitive transcranial magnetic stimulation," or repetitive TMS, is both FDA approved and widely available. But it requires a series of sessions over days or weeks. And larger studies are needed to determine how long improvements last.

"I'm very interested in creating something that is as effective as that. But you can use it at home still under prescription," Bikson said.

NYU is using a device developed in partnership with Bikson that can be positioned properly remotely.

BELLINI: You haven't done this long enough to know how long it will last?

LEIGH CHARVET: No. ... We know that more is better. We don't know if you reach a plateau or If you have remission in depression. Do you need to continue or do you need to taper it?

Meiklejohn has been using it daily, while meditating, for more than three months.

BELLINI: When did you start to notice changes?

MEIKLEJOHN: I'd say after about three weeks.

BELLINI: Has the suicide ideation gone away?

MEIKLEJOHN: Not completely, no. You know, when I dip, I dip. ... The difference is, I bounce back in a day or two.

Meiklejohn hopes she'll continue to be a portrait of hope.