Brazil's President Might Miss A Meeting On Rainforest Fires He Called 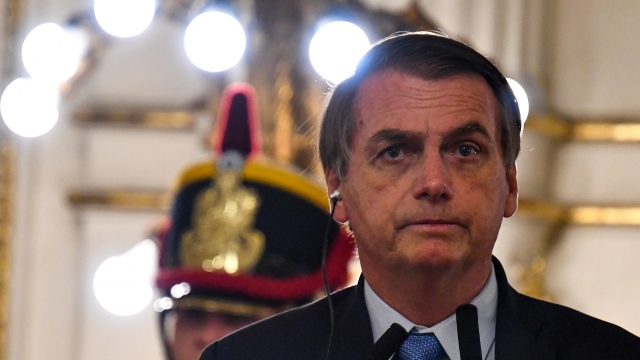 Brazilian President Jair Bolsonaro is ready to discuss the fires that have ravaged parts of the Amazon Rainforest — after his approval rating dropped.

The president called a regional summit with other South American countries to address the fires in the world's largest rainforest.

It's set for Friday, but as of right now, Bolsonaro won't even be able to attend. The president is scheduled to have surgery to treat a hernia. It will be his fourth surgery since he was stabbed nearly a year ago while campaigning for president.

Bolsonaro has faced international pressure to address the Amazon Rainforest fires. He's been blamed for rolling back rainforest protections and supporting the logging industry. He's also been accused of reinterpreting data about this year's fires instead of seeking solutions.

And it appears Brazilians are unhappy with his inaction. The latest poll from Brazilian Polling institute Datafolha shows Bolsonaro's approval rating has dropped from early July to the end of August.

The United Nations General Assembly is scheduled to discuss the fires this month, and Bolsonaro has vowed to attend. He told reporters: "I will appear before the U.N. even in a wheelchair, on a stretcher. I will appear because I want to talk about the Amazon."