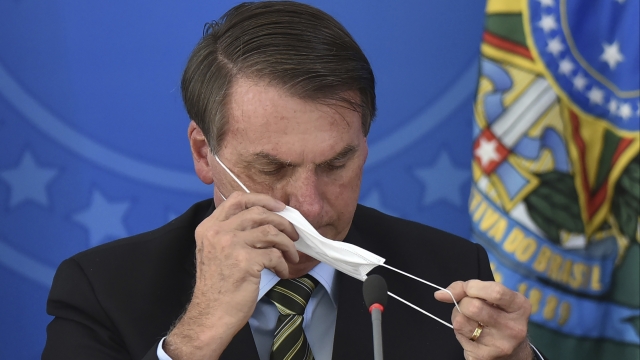 He is wading into crowds at public markets and calling for regenerating the economy by opening schools and businesses. He is also ripping state governors, urging them to roll back isolation measures over what Bolsonaro has dubbed a "little flu."

According to Johns Hopkins, Brazil by Tuesday had more than 4,600 Coronavirus cases. That was up from 2,400 six days earlier. During that same time, deaths had nearly tripled to 170.

Many of Brazil's state governors are defying the president, calling for lockdowns and other measures to slow the spread.

Among them is Gov. João Doria of Sao Paulo, which includes Brazil's most populous city of the same name. The Associated Press reports that Doria, once a Bolsonaro supporter, is threatening to sue the government if the president disrupts state containment efforts.

In a recording of a private meeting obtained by The AP, he told Bolsonaro: "You are the president and you have to set the example. You have to be the representative to command, guide and lead this country, not divide it."

Bolsonaro, who had been wearing a mask at coronavirus press conferences, is now attacking critics for endangering Brazil's economy. He told Doria: "If you don't get in the way, Brazil will take off and emerge from the crisis."

Bolsonaro said Brazil should take steps to protect the elderly. Otherwise, he said: "If we cower, opt for the easy discourse, everyone stays home, it will be chaos. No one will produce anything, there will be unemployment, refrigerators will go empty."

On Monday, both Facebook and Twitter ordered removal of posts by Bolsonaro that touted a malaria drug's effectiveness in battling the coronavirus. The CDC says the drug can cause severe consequences, including death.