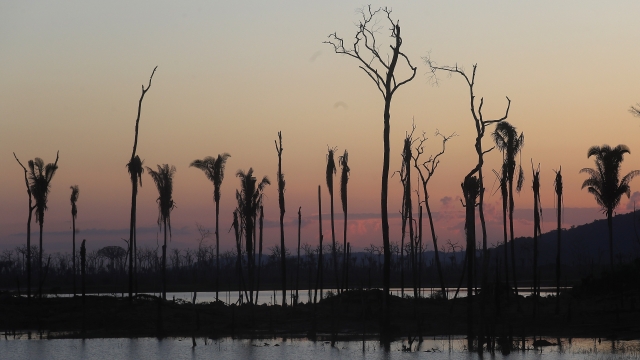 The space agency — which monitors deforestation via satellite — said its accuracy rate is over 95 percent.

Brazilian President Jair Bolsonaro has accused a state agency of publishing fake deforestation data after the agency reported a major spike in logging in the Amazon rainforest in July.

But INPE, the Brazilian National Institute for Space Research — which monitors deforestation via satellite data — stands by its report. The agency said it has an accuracy rate of over 95 percent.

The space institute said in the first fifteen days of July deforestation of the Amazon jungle in Brazil accelerated to more than 400 square miles. Reuters reports that's a 68 percent jump from the whole month of July 2018.

And while Bolosnaro denies the data, it is in line with predictions from environmental and human rights groups following the presidential election that deforestation would increase. As part of his campaign Bosonaro promised to roll back rainforest protections.

The space institute's findings could also have a major impact on trade. Just last month a South American trade bloc reached a deal with the European Union — one that included environmental commitments from member countries. The deforestation could be used by those opposing the deal to argue against it in Europe.

But, speaking to foreign journalists about the new findings Bolsonaro said: "The Amazon is ours, not yours." He claimed Brazil suffers from "environmental psychosis."