Brazil's Political Turmoil Is Being Compared To 'House Of Cards' 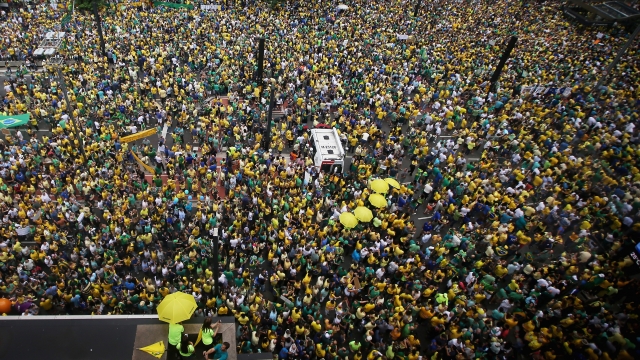 SMS
Brazil's Political Turmoil Is Being Compared To 'House Of Cards'
By Melissa Prax
By Melissa Prax
March 17, 2016
After Brazil's President Dilma Rousseff appointed a former president accused of corruption as her chief of staff, protests erupted.
SHOW TRANSCRIPT

It's a move opponents call a poorly disguised attempt to protect Lula from the Petrobras scandal — a wide-reaching set of allegations involving bribes and kickbacks from the government-affiliated oil company.

Part of Rousseff's motivation for appointing Lula is to help clear her own name amid impeachment — just another layer to Brazil's complicated political scene.

Lula was taken in for questioning at the beginning of March over alleged corruption involving the oil company, but he hasn't been charged yet.

And a judge released phone records between the Rouseff and Lula on Wednesday. The calls reportedly point toward the two trying to get Lula a cabinet position.

Both Rousseff and Lula deny allegations, and Rousseff said, "Lula's arrival in my government strengthens it, and there are people who don't want it to be stronger."

As for the jokes, some are comparing the scandal and aftermath to the Netflix show "House of Cards."

The show even gave Brazil's political drama a shout out.