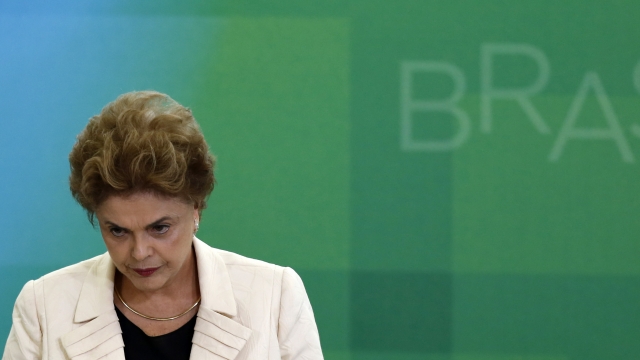 SMS
Brazil Moves Forward With Impeachment Process For President Rousseff
By Bell Johnson
By Bell Johnson
April 17, 2016
Brazil's lower courts voted in favor of impeaching President Dilma Rousseff. The Senate now must to decide whether to move forward with the process.
SHOW TRANSCRIPT

Now Brazil's Senate must decide whether to conduct a formal impeachment trial.

If a majority decides to do so, the Senate then has 180 days to carry out the trial. Michel Temer, Brazil's vice president, would temporarily take over Rousseff's role if that happened.

After the 180-day period, if two-thirds of the Senate finds Rousseff guilty, then Temer will serve out the rest of the term. That is if he survives the same impeachment process as his predecessor.

Rousseff and her cabinet came under fire after allegations surfaced that she took funds from the banks to boost government finances during her re-election in 2014.

Brazil's former president Lula da Silva is also in the middle of a corruption investigation, and while Rousseff hasn't been implicated in that scandal, she did attempt to appoint da Silva to her cabinet.

Before the vote, Rousseff's approval ratings were dismal, and experts projected her chances of avoiding impeachment to be around 5-15 percent.

This video includes images from Getty Images and clips from The Wall Street Journal, Petrobras and The Financial Times.