Fires In Brazil Stoke Clash Between Economic Gain And Preservation 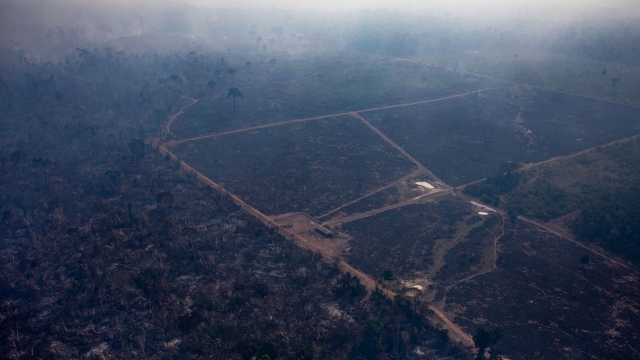 SMS
Fires In Brazil Stoke Clash Between Economic Gain And Preservation
By Peter Hecht
By Peter Hecht
September 6, 2019
In Brazil, forest clearing can produce quick riches But a rash of fires stirs debate over short-term economic gains vs. the life of the rainforest.
SHOW TRANSCRIPT

To global environmental activists and climate scientists, the importance of an enduring Amazon rainforest is undeniable. The forest is celebrated for its vast biodiversity. And it stores huge amounts of carbon, which can reduce the rate of global warming.

Now fires rage in the Amazon region, with many blamed on land clearing for ranching. That's triggering arguments in Brazil over what's more valuable: a forest left standing, or one developed for economic gain? The debate is nearly as intense as the fires themselves.

Assuero Veronez is president of a cattle industry association in the state of Acre. He says fire is an important tool for converting forestland for income-generating livestock or agricultural production.

"There is no alternative to fire in the Amazon," Veronez said. "It burns in the landscape of forest areas to enable agriculture or livestock. Removal of the forest is essential for introducing pastures, crops in general. Then people remove the vegetation from the forest by cutting with chainsaws. And then fire to clear the area."

In Brazil, deforested land can produce quicker returns. In fact, average acreage cleared yearly between 2007 and 2016 yields more than $110 million annually in agricultural production. Environmentalists question whether it's worth the destruction.

But Veronez says there are limits to romanticizing the Amazon when economic livelihoods are at stake. And he scoffs at preserving the forest as some medicinal treasure.

"There is this illusion of a biotech paradise for bioprospecting. To say that the forest may have some molecule that will cure cancer, or something like that which will bring development to the region because of this biodiversity, it is actually an illusion," Veronez said.

Veronez says residents of the Amazon region badly need economic development, which he argues the forest can still sustain.

"We have not reached the limit. The Amazon has about 25 million people. These people have needs. And they dream of growing economically. They need to improve their quality of life. They are poor. The Amazonians are poor compared to people in developed regions of the country. And the alternative we have is the forest, is to use its soil," Veronez said.

And yet a study last year in the journal Nature says a preserved Amazon rainforest is worth $8.2 billion a year in sustainable harvests, like timber, rubber and nuts. The economists and scientists who published the study say the economic benefits of preservation far outweigh short-term economic gains.

Foster Brown, an environmental scientist at the Federal University of Acre, worries that deforestation and fires have already caused serious, enduring damage to the rainforest.

"The concern is that we are very close to a point where at least a substantial portion of the Amazon may be in a climate regime that is not stable for evergreen tropical forest and which would mean a transformation from that active system to one that's more grass dominated and savanna environment," Brown said. "That is why, if that happens, we're going to have a lot of changes, a lot of burning, a lot of smoke. It's not going to be a lot of fun. It's going to be a very difficult situation."