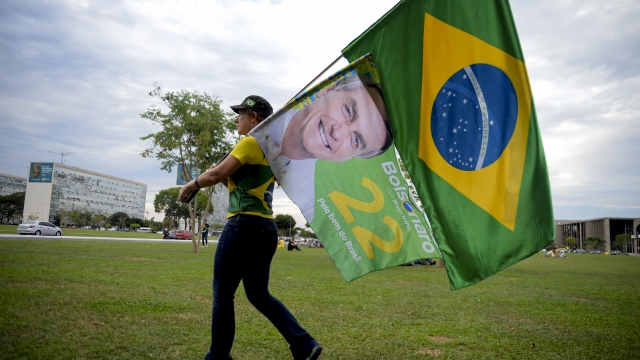 Former President Luiz Inácio Lula da Silva of the leftist Workers' Party got the most votes in Brazil's presidential election Sunday but not enough to avoid a runoff vote against his far-right rival, incumbent Jair Bolsonaro.

With 97% of the votes tallied, da Silva had 47.9% support and Bolsonaro 43.6%. Since neither candidate received more than 50% of the valid votes, which exclude spoiled and blank ballots, a second round vote between them will be scheduled for Oct. 30.

Brazil's election authority announced late Sunday that a second round was a mathematical certainty.

There were nine other candidates in the race, but their support paled to that for Bolsonaro and da Silva.

The highly polarized election will determine whether the country returns a leftist to the helm of the world's fourth-largest democracy or keeps the far-right leader in office for another four years.

Bolsonaro’s administration has been marked by incendiary speech, his testing of democratic institutions, his widely criticized handling of the COVID-19 pandemic and the worst deforestation in the Amazon rainforest in 15 years. But, he has built a devoted base by defending conservative values and presenting himself as protecting the nation from leftist policies that he says infringe on personal liberties and produce economic turmoil.

Da Silva is credited with building an extensive social welfare program during his 2003 to 2010 tenure that helped lift tens of millions into the middle class. He is also remembered for his administration’s involvement in vast corruption scandals and his own convictions, which were later annulled by the Supreme Court.

Recent opinion polls had given da Silva a commanding lead — the last Datafolha survey published Saturday found a 50% to 36% advantage for da Silva among those who intended to vote. It interviewed 12,800 people, with a margin of error of 2 percentage points.