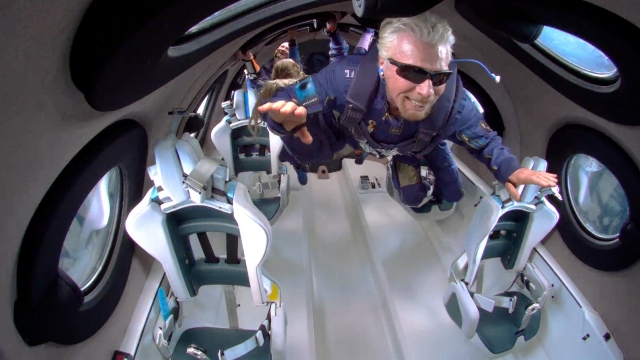 In the clear skies over New Mexico's spaceport America Sunday, billionaire Sir Richard Branson accomplished a goal over a decade in the making: successfully hitching a ride to the edge of Earth’s atmosphere, experiencing weightlessness for a few minutes and then returning safely to Earth.

The fully crewed suborbital flight, aboard Virgin Galactic's VSS Unity is a major win for Branson's pioneering space-line and the company’s investment in space tourism.

"It's one of the best feelings in my life," Branson said moments after returning from the flight. "I've waited nearly 70 years for this."

But the successful test flight didn't come without controversy.

Flying 53.5 miles above Earth, Virgin Galactic only reached space based on standards set by the U.S. Air Force, NASA and the FAA.

But the flight didn't surpass the so-called "Kármán" line, 62 miles up, which many internationally recognize as the point where space begins.

Branson, however, maintains the timing was a coincidence.

"I've said this so many times, it really wasn't a race," Branson told reporters after the launch. "We're just delighted that everything went so fantastically well."

Bezos' Blue Origin attacked Branson's Virgin Galactic over the weekend, suggesting Branson didn't actually reach space and hitting his company for not taking passengers over the Kármán line that some believe demarcates space.

But with a successful fully crewed flight under its belt and 600 people signed up to fly aboard Virgin Galactic, a new commercial space race has begun — though costs remain prohibitive, with seats on Virgin Galactic reportedly costing around $250,000.